The Mystery of The 7th Guidons

While the Title of this Article may convey an Agatha Christie or Sir Arthur Conan Doyle Novel, it actually is more of a ''play on words'', The ''7'' refers to The 7th US Cavalry and the intriguing story of what happened to the doomed Regiments Guidon Flags. As we have seen, US Army Lt. Colonel George Armstrong Custer and 250 odd Troopers of his Command, were totally annihilated by thousands of a combine Native American Force of Sioux, Cheyenne and Crow – at The Battle of The Little Big Horn River on June 26th 1876. A victory to The Native American, it was also their ''swan song''. The battle would be so ''colored'' by The Media, that Public apathy ''for'' the Native Americans would soon change into fury (and spell their eventual end as a ''Free People'').

The mythos of Custer covers many fables and tales (most of which were false). One seldom told is the whereabouts of Regiments Guidons – all thought captured by The Native Americans. As was tradition in their warfare, The Sioux were ''war trophy'' collectors. It was considered a great prestige for a Warrior to take a dead Enemies weapons. Using them in battle, was thought to give one a ''supernatural'' advantage over one's future Enemy. The bodies of Custer and his Troopers were stripped of their uniforms with all weapons and personal possession taken as ''prizes''. The Sioux realized the special importance that Flags held for ''White Soldiers''. These were also sought out.

Custer divided his command into (3) sections of (7) Companies. Each Company was issued a standard ''Swallow-Tail'' style Guidon Flag. The US Cavalry used The US National Flag (The Stars and Stripes) as it's motif. Unlike the ''late'' Civil War of 1861 to 1865, US Cavalry Units stopped embroidering their Unit Numbers and Letters onto their Guidons for identification. All of Custer's Guidons were the same standard pattern. This was roughly 33-inches by 27-inches and made of silk. 35 White hand-sewn Stars were arrange din a circular pattern on the Blue Canton located on the far Left Hoist side. The Guidon was affixed to a 9-foot Ash Pole and was topped off by a solid brass ''Spear Tip'' type top cap.

THE ''KEOUGH'' GUIDON
Named for Capt. Miles Keough, one of Custer's Company Commanders (Company I), this Guidon has the most direct meaning in The Battle. Re-captured at The Battle of Slim Buttes (September, 1876). A pair of marked Company ''I'' Trooper gauntlets were also taken. Improperly maintained and cared for, it was eventually restored as best as possible and is occasionally displayed at The Little Big Horn Battlefield Museum in Montana.

THE ''RENO'' GUIDON
Somewhat more dramatic, A Guidon carried by Major Marcus Reno's Company was recovered during The Battle itself. A Sharpshooter with the beleaguered Company saw a Sioux Warrior had not only captured Reno's Colors, but was taunting that detachment of The 7th. A well placed shot killed the Warrior. Another Warrior tried (unsuccessfully) to take it back – meeting the same fate. The Sharpshooter crawled out under cover of night and retook Reno's Guidon. ''Legend'' stated that he kept it as a ''personal souvenir'' of his ''near death'' experience. The Sharpshooter would eventually leave the Army and make friends with none other that William ''Buffalo Bill'' Cody. Cody wrote later that the Sharpshooter showed him The Guidon. However, the ultimate fate of The Sharpshooter – and The Guidon is unknown.

THE ''CULBERTSON'' GUIDON
So named for The Sergeant that ''discovered'' The Guidon, this NCO was among the first to being the task of burying the remains of The 7th where they fell on the battlefield. Rolling over a dead Trooper, Culbertson found The Guildon folded and hidden inside the shirt of a fallen soldier. Bloodstained, he cleaned it up and kept it as a souvenir. Remaining in his Family, it would eventually be donated to an Art Museum who would sell it in 2010 for the tidy sum of 1.9 Million USD!

THE ''ROACH'' GUIDON
And finally, the most bizarre of The Guidon stories is The ''Roach Guidon''. Said to have been given to a local retired US Army Army Officer by The Niece of Chief Sitting Bull of The Sioux (and principle Warchief of The Battle). The Officer was known by The Sioux as a ''fair Man'' (a very large compliment by a Native American to a ''White Officer''. A Guidon reputedly taken during The Battle was presented as a gift. However, for as many Historians that cite it is in fact a ''lost'' 7th Guidon, many stated that while it is a ''Period'' Guidon (no doubt captured), it is not a Custer Flag. Testing of The Guidon has never been allowed or considered – for it was washed many years past. Any material (DNA), which could have been extracted has long since been obliterated. Still, with advances in DNA Testing, several Modern (and expensive) Tests could still be made to verify The Guidon. Until such money is raised or otherwise secured, The Guidon remains carefully preserved and locked away at a South Dakota Museum dedicated to that States Military Soldiers and Sailors. A replica is on display in it's stead.

And of the remaining (3) Guidons? One one is quite sure. Perhaps they were kept and passed down through many generations of Native Americans, carefully guarding their secret of a long ago victory. Perhaps they were destroyed or even buried as part of a cache of weapons, stored to be recovered at a later date when needed and long since forgotten. 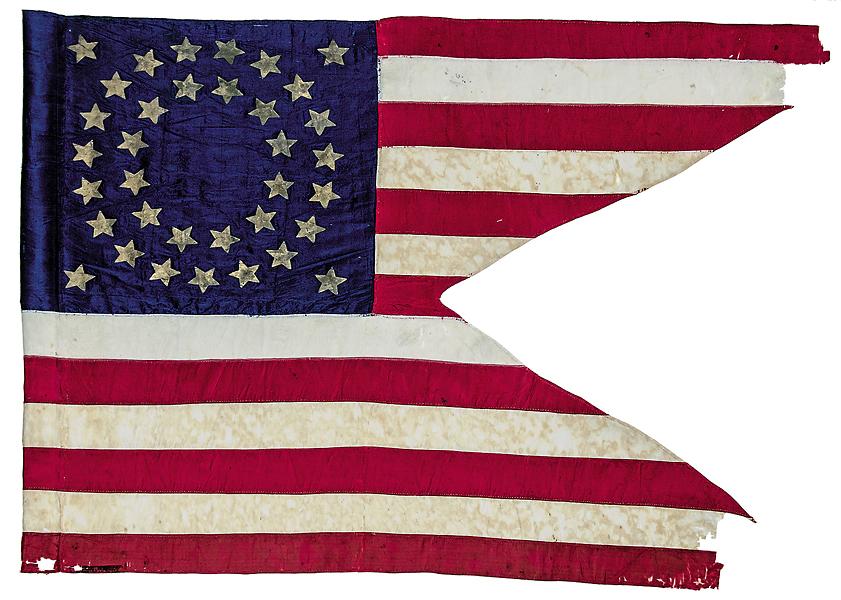 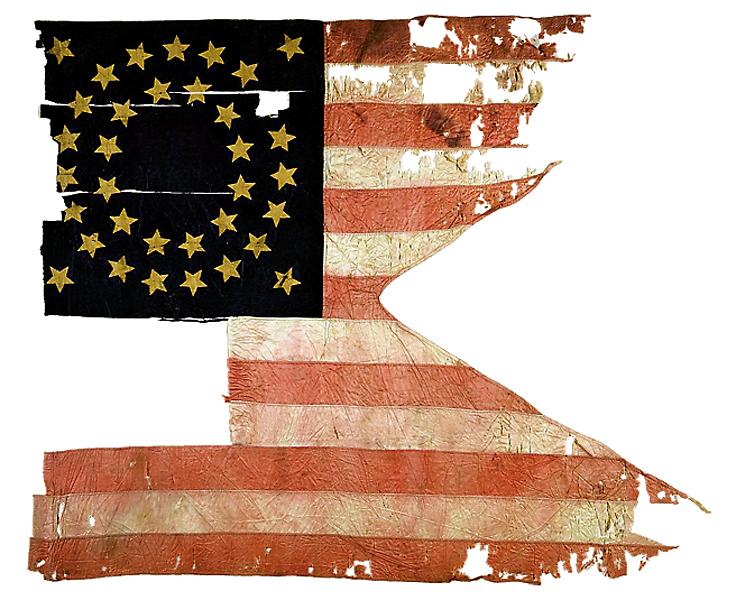