Raised in support of The Mexican-American War (1846), The so-called ''Mormon Battalion'' was the only ''Religious Based'' Military Formation in The US Army. The Religious sect known as The Church of Jesus Christ of Later Day Saints (aka ''The Mormons''), had existed at odds with The Federal Government almost since they came into existence (1830). Being ''run out'' of a succession of American States beginning in New York and ending when The Mormons colonized the barren Mexican Territory of Utah – they had come to War themselves with The US Army many times. The Mexican-American War was seen by The Mormons as a means to illicit aid from their Governmental Adversaries and be in a position to capitalize on the possibility of Territorial Government Control when The War ended.

As such, the normally Pacifist Mormons raised a Militia in 1846. Over 500 Officers and Men of The Mormon Faith entered service during The War with their Battalion. As per Company Charter, only Mormon Officers and NCO could command, although Regular, Non-Mormon Army Officers held reign ultimately. The Battalion made a name for itself quickly, when it marched 2,000-miles from Iowa to California (San Diego).

Enroute, The Battalion captured Tucson, Arizona in 1846, taking the Village from a detachment of Mexican Soldiers. Arriving in California, they supported local Native Americans being massacred by The Mexican Government. They would move into Los Angeles in support of Army and Naval Forces there, helping built Fort Moore. While many would leave after The War to return to Utah, many more stayed when Gold was discovered in The North. As such, a moderate Mormon presence would be established early in The State. 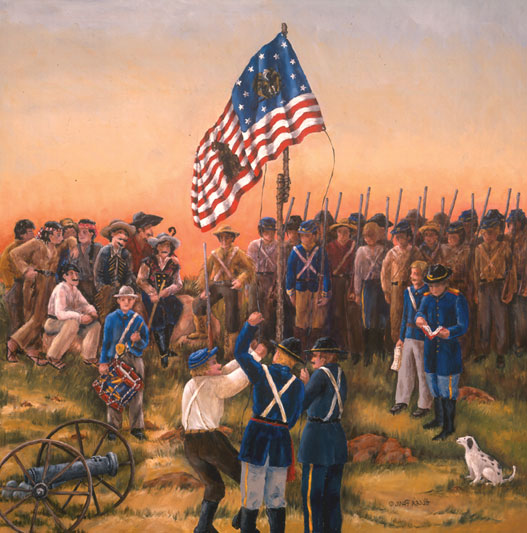