Commissioned by The English, The Dutch built “Mayflower” around 1599. A Fluyt-class vessel, she displaced around 180 tons and was 100 feet long. Designed with 4-decks – nonetheless “Mayflower” was considered a “small vessel”. Originally pressed into Merchant Service, by 1620 – she was considered an “old boat”. Due to her 30 foot high beam, she was difficult to sail against the wind. “Mayflower” was taken out of service in 1615 – she was sold to private interests. With the rise of “religious freedoms” being called into question in England – and the on-going clash of Protestantism and Catholicism – a group of Separatists (known as “Pilgrims” and cashing in on relocation to The New World), chartered “Mayflower” and the ship “Speedwell” to take them across The Atlantic Ocean. A hazardous journey even in the most “modern” of Period ships - “Mayflower” was the only one to complete her trip. Some 130 Colonists made the crossing (2 would die enroute and over half would die in the first Winter of The New World) – landing in Plymouth, Massachusetts Bay Colony in 1620. The “Mayflower” would ultimately be responsible for opening the future passage of Colonists to America. Evaluated in 1624, her history is shrouded in some mystery. Some accounts state that her age and design caused her to be broken up (in England). Purchased by a local Farmer, the timber was used to built a barn (which is still visited today). Some state that she was refitted in 1629 and made several more Trans-Atlantic voyages for settlers and supplies. This “Mayflower” was reportedly “lost at Sea” in 1642. 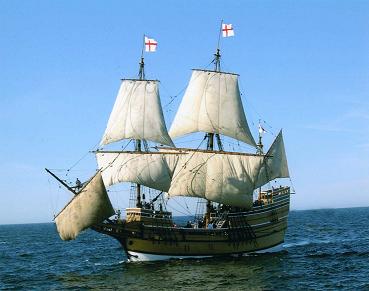