This Carrack-style vessel was the Flagship of the Tudor Navy of King Henry VIII of England. Commissioned in 1510 and launched in 1511, The Mary Rose served for 33 years in various wars with France, Brittany and Scotland. Originally weighing 500 tons (displaced), she was rebuilt in 1536 which increased her weight to around 800 tons. She carried some 80 to 90 cannon and guns of various calibers and types and held a crew of 400. She was considered one of the largest ships afloat in her heyday and was at the pinnacle of Tudor English naval technology.

The Mary Rose was also one of the first ships in history capable of initiating a broadside attack (the ability to fire lines of guns simultaneously from multiple decks on the ship, via firing ports on the sides). It was at The Battle of Solent (1545), that signaled the demise of Mary Rose. During a pitched battle with French Galleys, The Rose began to list to one side heavily. This imbalance caused water to rush through her gun ports rapidly. The resulting tilt and weight from article and materials crashing into one side only added to the ships inability to right herself (left alone the use of bilge pumps to remove water). A fire erupted on the deck (from on deck Cannonball furnaces). In the resulting chaos, The Mary Rose floundered and sank with only 35 of her crew of 400 surviving.

Many historians have speculated on the cause of the ship in her weight so rapidly. Some blame the recent (1536) rebuild with a design flaw. She was rediscovered in 1836, with early expeditions to recover artifacts beginning (and limited by the technology of the Era). Starting in 1966 and carrying through until 1978, more modern expeditions were conducted on the wreck. Almost the complete (albeit badly deteriorated) wreck was raised and has been under going intense and slow conservation of the vessel. The conservation process along with thousands of artifacts are currently displayed at The Mary Rose Museum in Portsmouth, England. 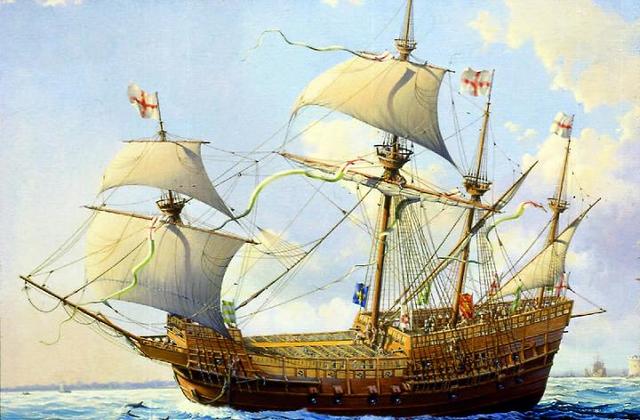