Perhaps the most iconic (seen) and imitated throughout Western Novels, Movies and Television Shows for Generations, The ''Low Ride'' Style is also one of the most misconceived of Western Holsters. In used, a Holster featuring a long Back Shank – attaches to a Gun Belt. The side (Left or Right), is dependent on The Shooter.

The Back Shank extends the Holster ''drop'' from the Hip to as much as 5 to 8-inches, placing a Holster almost ''hanging'' to mid-outer thigh. In reality, the ''Low Ride'' allowed for The Shooter's Firing arm and hand to be fully extended. Thus, when drawn from the Holster, The Shooter could raise the Handgun straight up to either waist or chest level (what which would be later identified as ''Center Mass'').

The drawback is also part of the misconception about The Low Ride Holster. A Holster of The Era (1875-1885), was ''tied down'' to The Leg of The Shooter. In contemporary terms, this involved a simple piece of leather tong or strap. Laced through a hole at the bottom of a Holster, the lace went completely around the Holster Leg (and was tied). This simply stabilized the Holster – which made any draw technique possible.

IF a Holster (especially a Low Ride technique) – was attempted, in reality – one would not be able to pull the Handgun ''up and out'' without ''jerking'' to either the left or right. The obvious outcome – The Shooters death as a result of the additional time compensation and re-aiming needed. All these difficulties were removed – simply by the Tie Down.

The ''Penny Novels'' of The Era (and later early Hollywood) – firmly cemented the idea of the Low Ride ''Gunfight'' in the minds of The Public, so much so - that the actual method of use was forgotten. 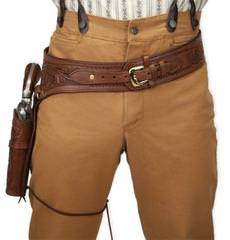