Built in France (1863) and launched in 1864, the Ironclad-Ram which would known as The ''Kotetsu'' started out it's life as The American Confederate Warship CSS ''Stonewall''. Built in violation of an established regulation between France and The United States to NOT support The Confederate ''cause''. She was not only built – but armed and Crewed in Europe. Perceived as ''so deadly'', Federal Warships were stationed outside of French waters to monitor and possibly engage Her, when she went to Sea. Doing so in 1864, Her size and impressive armament caused The Federat Warships to steer clear. As The ''Stonewall'', She made for The Caribbean – in hopes of eventually moving off The Coast of South Carolina. There, ''Stonewall'' would have attacked any Federal Shipping as well as support moves again Union General William Sherman and his infamous ''March to The Sea''.

However, when The ''Stonewall'' reached The Caribbean for supplies, Her Captain learned that The Confederate had surrendered – ending The War. Rather than surrender ''Stonewall'' to Federal Authority, he ''sold'' Her to Cuba (for $16.000.00 USD). Later, The Cuban Government sold ''Stonewall'' back to The US. She remained in US control until 1868, when ''Stonewall' was sold to The Imperial Japanese Navy (for $30,000.00 USD). Seen as part of The Japanese Modernization of it's Military, She was named '' Kotetsu''. Serving in several capacities, ''Kotetsu'' was used in several rebellions against The Imperial Government. By 1888, ''Kotetsu'' was regulated to Harbor Patrol Duties. She was scrapped soon afterward. At one point in History, next to The French Ironclad Warship ''Gloire'', She was considered the most powerful Ironclad ever built.

''Kotetsu'' displaced 1,385-tons. She was 195-feet long with a Beam of 15-feet. Powered by Twin Double Reciprocating Steam (Coal fed) Engines – which could achieve 19-mph. In Her American Civil War configuration, ''Kotetsu'' crewed 135 Officers and Men. Armament changed during Her Service. Her American Civil War deployment included (1) 300-pound Armstrong Cannon and (2) 70-pound Armstrong Cannon. Her Armor plated Hull and partial Superstructure ranged from 3.5 to 5-inches (inclusive of Her Iron Ram, which extended 15-feet). 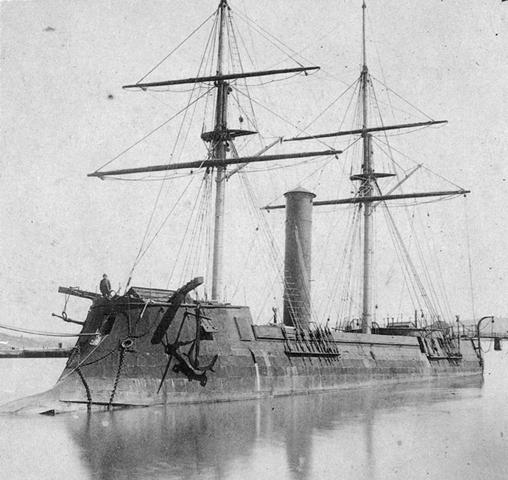