We have seen that the oft seen American Western ''Gunfight'' – which involved two focused ''Gunmen'', facing each other off on some dusty street in some dusty Western Town, only to resort to the ''Quick Draw'' and the death of one (or both). Unfortunately, most of the above is nothing more than ''Western Fiction'', contrived for the many Hollywood Films and countless Western Novels. But, as often with Fiction, there was a kernel of truth. Such a truth was recorded on July 21, 1865 – between iconic Western Figure James Butler ''Wild Bill'' Hickok and David Tutt. The gunfight took place in The Town of Springfield, Missouri.

Both Men were known to each other, and some Historians find evidence of a friendship of sorts. Hickok (with His many ''talents'') was first and foremost a Gambler (seconded only to His skill as a Gunman). The two met again in Springfield, Missouri. Becoming involved with a female (that both wanted), Tuff would turn out a ''sore loser in love'' when He was ''bested in affections'' by Hickok. Angered, the two would met up later at a local Saloon – becoming involved in a Card Game.

Tutt had been thru Springfield on many occasions and was well known and liked by other Gamblers. Hickok's ''name'' was just beginning to become ''known''. During a particular high stakes game, Hickok had to put up His Gold Watch as a bet (worth $35.00 USD). Rather than honoring the bet thru, Tutt advised Hickok that He would ''hold His Watch'' until ''payment'' was made. This was seen as a major incursion of Honor among Card Gamblers with verified collateral. Tutt would ''wear'' Hickok's Watch from His Gunbelt openly, as if to ''agitate'' Hickok. Hickok did not wi9sh trouble and tried to give Tutt the money in exchange. Tuff refused and said that ''Now, The Watch was worth $45.00 USD''.

Unwilling to bear anymore insult, Hickok went back to His Hotel Room and readied His pistols. Tutt had spent the morning ''bragging'' on how He had ''taken and planned on keeping The Watch''. In the first recorded example of the ''traditional'' Gunfight – Hickok strode out from the Hotel and crossed the street in front of The Saloon. ''Here I Am, Dave'' – is what Hickok said. The two moved into the street and faced each other roughly 30-feet. Some say Tutt drew first....but Hickok was faster, placing a single Colt .36 Caliber round into Tutt's flank. He dropped to the street and died thereafter.

Tutt's popularity would cause Hickok to be arrested for murder. Despite witnesses to the contrary that say that Tutt drew first, His popularity twisted this fact. Eventually, the charge was reduced to Manslaughter (Hickok plead Mutual Combat). His excellent record with The US Army as a Scout, brought the very Governor and several Army General Officers as witnesses to Hickok's character. He would eventually be cleared of the Murder charge. The Gunfight would almost immediately become fodder for the ''Dime Novel'' Trade, and The Hickok-Tutt Gunfight would serve as the template for the iconic Western ''Street Gunfight''. 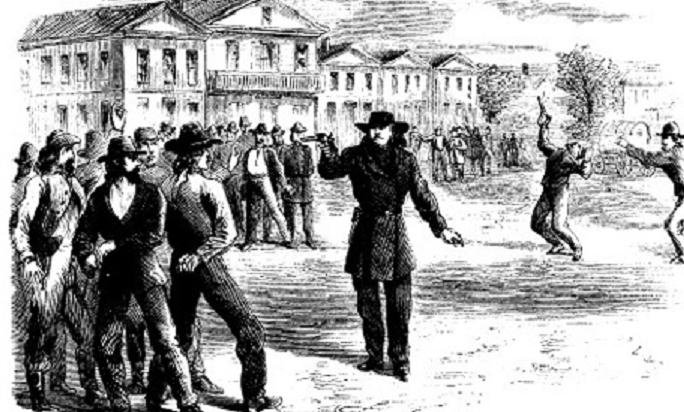