The original “Hermione” was a French Concorde-Class Frigate Warship – that was originally built in 1777 and launched in 1779. Displacing over 1,000 tons, “Hermione” was over 200 feet long and sat 40 feet tall (beam). She was wind powered and fully rigged. Her original crew compliment was 225.She mounted 40-guns of various poundage (primarily 12-pounders). The “Hermione”s claim to fame was that she was the vessel used by French General Gilbert du Motier, Marquis de Lafayette (and 200 additional French soldiers) to land in The American Colonies, and thus show France's recognition of the new Country. The “Hermione” remained in The Marquis' control during his entire stay in America. She engaged many British warships in American waters and served as the American “Navy” until ships could be built (or procured). She returned to France in 1782. While being deployed again against The British in 1793, she ran aground of of Le Croisc (the Western Coast of France), a storm then wrecked and sunk her. In 1997, The French Government set about to rebuilding an exact replica of The “Hermione” (plank by plank and sail by sail). Other than a “new” engine system, The “new” “Hermione” is perfect copy of the original. She was sailed from France to America recently, recreating her historic arrival in The United States. 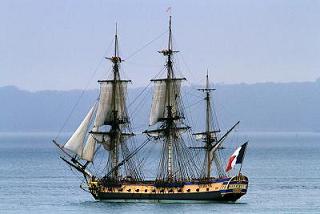