In the mid-19th Century, The City of London, England underwent a severe eco-hazard which caused the deaths of thousands of it’s Citizens. The conditions of which, had grown for nearly Centuries of mismanagement with regards to the management of industrial and human waste. The situation was so dire, that if unchecked – may have rendered London inhabitable within a period of 50 years. The Event was known as The “Great Stink of 1858”.

BACKGROUND:
London was at the center of Europe’s industrial resources. A major hub of trade and immigration, millions thronged to it’s confines. The Land and City was never designed to accommodate the increase of either. This lead to the natural occurrences of both disease. This was borne from the increase of food production (meat) and human waste as a result in consumption. Since the earliest of London’s times, waste was carted to one of the 200 Cesspits located throughout the suburbs and City confines. In most cases, overwhelmed – diseases such as Cholera, Malaria and a host of other Vector borne issues arose in the summer time. It was well known by both Royalty and Nobles to leave the City by summer and seek safety in the far North in “Summer Palaces” and Manor Homes. The poor, unable to escape the heat or resulting disease, had no choice but to survive as best they could or die.

POOR ATTEMPTS AT RELIEF:
As early as the 17th Century, civic plans were put into place to remove the problem (so it was thought). The construction of miles of underground sewage piping and tunnels (made of brick) were instituted. But the brick in some cases was poorly made and within 100 years, it was overwhelmed. Failing in spots and without the benefit of pumping stations or treatment facilities, most of London’s waste simply spilled onto the banks (and into) of The River Thames. This (over the Centuries), amassed into great piles of slug that attracted rodents and flies. During the summer season, great swarms of both were present in and of course above, London. An estimated 5 to 10,000 perished as a result of the health conditions (also exacerbated by overcrowding in London’s slums – which were becoming quite substantial by the 1850s).

A NEW NAME:
Scientists named the noxious vapors that were a result of the summer waste accumulation “Miasma”. It was determined that the “clouds” of vapors carried with them a host of disease. Conversely, The River Thames was severely contaminated as a result, and it’s water’s were also nicknamed “Monster Soup” (arising from the micro-organisms). It was determined that the mere breathing in of the Miasma was dangerous and life-threatening.

A SAVIOR:
Joseph Bazalgette, a Civil Engineer devised a plan to save London and better regulate the waste management problem. He began to construct better sewage piping made from cement and instituted multiple pumping stations to maintain a constant “flow movement” of fluid waste. Additionally, the construction of Treatment Stations, by which lye and other chemicals could be added to assist in the “speedy” break down of organic waste – were built. Finally, Bazalgette stopped the dumping of such waste onto the Thames riverbanks. A series of piping ran along The Thames (and not into it) – carrying the treated sewage far away from London. Much was barged and taken to Sea.

CONCLUSION:
It took until 1875 to cut London’s waste disposal and management problem into a manageable condition. Made better, the issue would however still be a problem. London continued to grow (even past Bazaelgette’s ideal). Many renovations and improvements to the technology have been instituted, but many Modern Civil Engineers and Waste Management experts state that the “old system” is again overburdened and out of date. Perhaps the surge of “Miasma” may yet come again to The River Thames. 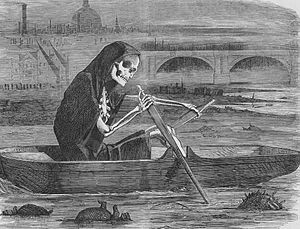