A seldom told story from The American Civil War was “The Great Locomotive Chase”. It involved the Union Steam Engine named “The General” and “The William R. Smith”. “The General” was built in 1855. Originally a 4-4-0 gauge Engine, she weighed 50,000 tons. Her coal and wood fed boilers allowed her the top speed of 40 miles per hour! Captured by Southern Forces at the start of The American Civil War, a Union raiding party commandeered “The General”, outside of Kennesaw, Georgia. The local Rebel Army “gave chase” with the much smaller “William R. Smith”. Union raid Commander James Andrews planned on taking “The General” to Union Lines outside of Chattanooga (Tennessee). At break-neck speeds, the two “Steam Monsters” barreled through the countryside. The “Smith” (running out of fuel – was replaced by the equally powerful “Texas”). Andrews and his team made 116 miles, before running out of fuel. They attempted to wreck her but they had to escape on their own. Some of Andrews men were the first to be awarded The Medal of Honor for their actions in “The Great Chase”. The “General” was eventually repaired. After the war, she was fully restored and displayed much later at Downtown Atlanta (Georgia) - Museum of The Fall of Atlanta. 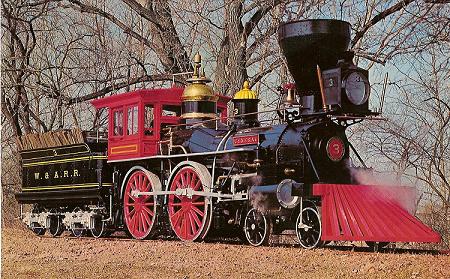