In the decade before The American Civil War, The North was desperate to keep The Union together. The “Majority Vote” of most Legislative Houses in Washington D.C. - was cast by Southern Politicians. Their “agenda” was simple. Maintain the “Southern Way” of life. This “Life” was based on a wealthy, land-owning caste system (somewhat descended from English aristocracy established before The American Revolution). Agriculture (as was it's fruits of Cotton and Tobacco) – were “King”. The North (with it's heavy industrial background) was at odds.

The North did not use the “slave labor” methods of The South. Although not as “forward thinking” either, The North used “paid” cheap labor in the form of immigrants (Blacks included). Into this political and ethical morass – The Fugitive Slave Act came to be. Born out of The Compromise of 1850 (and written by Southern Firebrand Henry Clay), The South “agreed” to allow The Territory of California to be admitted to The Union as a “Free State” (meaning Slavery was not permitted). In exchange however, Northern Legislators had to agree to The Act. In part, The Act stated that IF a Slave escaped from The South (into The North), a “Bounty Hunter” (duly licensed to function as such) – could be employed by the former Owner, and “pursue” said “Property” into The North (or ANY declared “Free Territory”) - for the purposes of bringing the “Runaway” into custody (for delivery back to his or her former Owner). The Act was in essence - “legally permitted kidnapping”.

The North would not (and could not) stop such activities. As horrible as it sounds, The Northern Legislature agreed to The Act (to incorporate California as a State). As a predictable result, IF a “Runaway” could not be apprehended, Hunters would have no trouble taking a “Free Man” (Black born in The North) – EVEN if he or she had NEVER been a slave! The Fugitive Slave Act would cause a “ramp up” in the secretive “Underground Railroad” Slave Smuggling Network (established by Northern Abolitionists). Most “Freemen” traveled in groups (mostly armed). The Slave Act would be “tested” with the famous “Dredd Scott Case” in The US Supreme Court (failing to support the unconstitutionality of The Act) 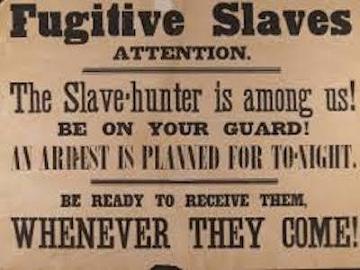