''Aces and Eights'' – The ''Dead Man's Hand''. Long of source of American Old West ''Myth'' and ''Legend''. It was this Poker Card Game Hand that was ''held'' by Legendary Old West Gunfighter and Gambler, James Butler Hickok, - or as he is better known ''Wild Bill''. As we have seen previously, The Town of Deadwood, Dakota Territory's most famous Resident, this particular Poker Game was seen as Bill's ''death knell'' – and part of His long lived Legend.

McCall had been rebuffed by Bill many times on the Streets of Deadwood (as ''Wild a Frontier Town as any that existed''). McCall (as did most ''unknowns'' trying to ''make a name'') desperately wished to be ''noticed''. Every fight or encounter with anyone He met, didn't get him his ''name'' – but more often than not, jailed). Even Bill ''refused to fight'' a ''no name upstart as McCall''. Regardless, that didn't stop Bill from ''taking His money is a Card Game''. Besides, Bill had witnessed McCall's ''sound thrashing'' the day prior at Poker. ''Wiped out'', Bill; was said to have ''thrown money'' at McCall to ''pay for a breakfast''. A humiliated McCall left the Saloon.

While the term ''Dead Man's Hand'' did NOT exist prior to the famous Game in 1876, it was a fair bet by those present that Bill was by far a superior Player. A Professional Gambler (among other Professions), perhaps Bill cheated (palmed or miss-shuffled) to get the hand He wished. Perhaps McCall saw Bill do it. No one is quite sure.

Feeling ''cheated'' McCall paused His Game. Stepping up to The Bar to get a drink, maybe he saw Bill's hand. Bill was facing away, with the back of His head to McCall. McCall pulled his Gun and fired one shot – right into the back of Bill's head. In an instant, the ''Legend'' was gone – and McCall got his ''wish'' at fame – to a degree.

A series of trials at first had McCall go free. However, ''Murder'' has no time limit. The ''third time was a charm''. McCall was convicted and sentenced to ''hang by the neck'' for His crime. The sentence was carried out in 1877. McCall is remembered, as the ''Cheat Killer'' of the great ''Wild Bill'' Hickok – with The ''Dead Man's Hand'', still considered the most ''unluckiest of 5 Card Stud Hands'' – played. 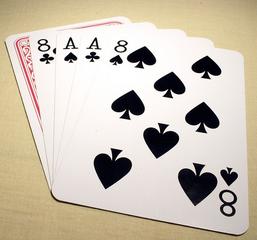