An unusual and seldom heard of Flag, The ''Bob'' Flag was a 2nd Anglo-Boer War ''unofficial'' Standard, named for Commander-in-Chief of British Forces in South Africa, Lord Frederick Roberts (''Bob'' being the diminutive of ''Robert''). The one time Military Governor of British Natal (South Africa), Lord Roberts had extensive experience on The Continent. Often bragging that Lord Robert's ''harsh and punitive'' measures in warfare (as seen in some of His Commands in Afghanistan), had many seeing The Boer Stronghold of Pretoria falling within weeks of His British Invasion.

So confident, a Banner (or defacement) of The British Union Jack circulated in many Line Commands. The ''Flag'' would be raised when The Army ''took'' Pretoria. It did not do so, and would fight a hard pressed series of battles from 1899 to 1901, until The Treaty of Vereeniging ended The War in 1902.

The ''Bob'' Flag is a basic British Union Jack (Red, White and Blue vertical and horizontal striping), composing of The Flags of England, Scotland and Ireland (The United Kingdom). Centered is the image of a Mounted British Officer (presumed to be Lord Robert). Above this image was inscribed the word ''PRETORIA'', with ''BOBS'' below. 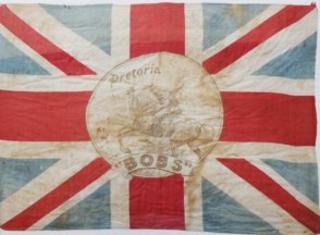