The Black Hills Expedition of 1874

The US Government had been in a ''State of War'', (on again of again) with The Native American Sioux Nation for many years. With the signing of the now infamous ''Fort Laramie Treaty of 1868'', the open hostilities ended (more or less). The Treaty gave vast areas of land (Reservation) to The Sioux in exchange for remaining in the Region (what would become South Dakota). Part of this (at least by Native American belief) was to include their ''sacred'' Black Hills. Seen as a focal point of their ancestral ''Spirit Worship'', The US Government was also to promise that no ''White Settlers'' would travel thru or try to settle this Region.

The Sioux also agreed to ''settle'' any disputes of such with ''White Man Law''. This relationship was somewhat honored – until trespassing Miners discovered Gold in a portion of The Black Hills.

A section of The Black Hills were seen (at least by The US Government) – as not being on Sioux Territory (by Treaty). Unknown and unexplored, The Government decided to send an expedition by which to map and determine if Fortifications would be established. To support this, 1,200 Soldiers and Civilians were amassed for what would become – The Black Hills Expedition of 1874.

The US Army deployed The 7th Cavalry, under command of the flamboyant Lt.-Colonel George Armstrong Custer (of American Civil War fame). The youngest Brevetted General of that War, Custer was to protect The Expedition. It would be trespassing Miners (Mineralists with The Expedition) – who found Gold – a lot of it. Custer sent word back to Fort Lincoln (Dakota Territory) of the discovery.

The Expedition took several months to complete (Cartography, etc). When word reached The Fort that Gold had been discovered, The Army ordered The Expedition back. But the word was spreading like wildfire. Soon Settler and Miner began to flock to Fort Lincoln for the purpose of ''striking it rich''. As far as these people were concerned, they would not be in ''Indian Territory''.

However, as more Gold was found, deeper into restricted lands Miners went. When found, The Sioux tried to ''follow'' The Law. The Government was both lax and apathetic in enforcing The Treaty. Of the few that were delivered over to The Courts, none were actually imprisoned. The Sioux saw this as not only ''another lie'' but the very real possibility of losing their ''Sacred Hills''. The result was to become bloody.

Miners and Settlers found in The Hills (any portion) – were killed. As word reached The US Army at Ft. Lincoln (and The War Department in Washington DC), they saw it as The Sioux breaking The Treaty. This time, no Expedition would be sent, this time an Army would. The Plains Indian Wars had begun. They would reach a peak 2 years later in 1876, when one George Armstrong Custer and his 7th Cavalry Command would be obliterated at The Battle of The Little Big Horn (June 25). 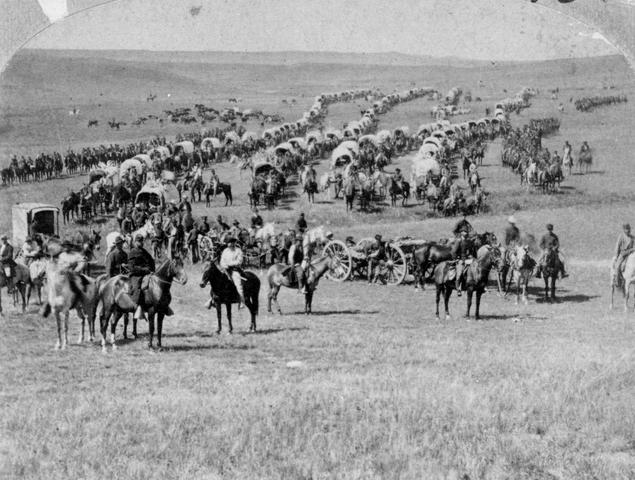