Possibly on of the "greatest" early Middle Ages naval engagements, Svolder was fought around 999 or 1000 A.D. - near Rugen, Germany (North Baltic Sea). The forces of Viking King Olaf Tryggvason (Norway), was ambushed by a combined and allied force of Denmark, Sweden and Earls of Lade (independent principalities of Norway NOT in alliance with Kong Olaf). While returning from a military expedition to Wendland (Pomerania), Olaf - with 11 ships was attacked by roughly 71 ships. Dislike for Olaf came to a boiling point with his assumed Christianity and his wish to convert all of his Kingdom. Many Norse still wished to follow their Pagan customs and Olaf was not the type for religious freedoms. His troops would kill those who would not convert and take their wealth and land from surviving relatives. This led to plans of overthrow and assassination.

Although outnumbered in terms of ships, King Olaf had probably the height of Norse naval technology at his disposal - "The Long Serpent". In terms of typical Long Boats (the Viking standard vessel), The Long serpent was more of a battleship. 2 times as long, (nearly 300 feet) - it was no doubt an impressive ship that only a King could build. King Olaf, knowing he was outnumbered, lashed (tied) his ships together in a line. The Long Serpent in the center. The warriors shields tied amidships and the oars raised straight up. Olaf had created a "floating fort". The Danish allied Fleet attacked. As if a winter storm at sea had hit, the arrows fell thick. Still, Olaf held fast.

Next came the fire. Burning arrows streaked the skies like thousands of meteors, smashing into Olaf's Fleet. Slowly, ship by ship burnt and sank - it's warriors jumping to the next undamaged boat. Finally, hand to hand combat began. Bloodied and running out of men Olaf was finished. When the last of his men died, Olaf (in true Viking fashion) - fully armored (and not wishing to be captured alive), jumped into the sea.

His Kingdom would be split between the victorious allies. Most of his Kingdom did not rebel. Ironically, although Paganism continued -so did Christianity. Neither would be outlawed (with Christianity becoming the predominate religion in the region in just a few hundred years). 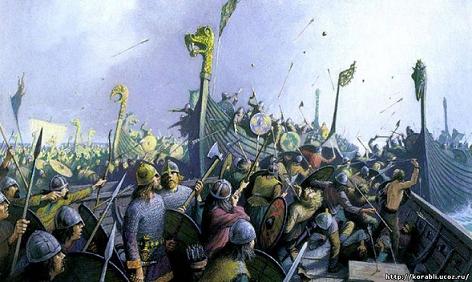