The Battle of Sinope

Fought during The Crimean War, The Battle of Sinope was fought on November 30, 1853. In October, The Ottoman Empire declared War on Russia. Czar Nicolas I would retaliate by sending an Imperial Naval Fleet into The Black Sea. They were sent to engage a much small and weaker Turkish Fleet. This Fleet (however), had to shelter in the Harbor of Sinope (Northern Turkey). Undeterred, The Russian Fleet sailed into the Harbor, determined to attack. 6 Russian Ships-of-The Line (forming 2 Squadrons) – opened fire with the massive French Paixhan Guns (68-Pounders). The Paixhan featured an “explosive shell” fired at a flat trajectory. The Russians raked The Ottoman Fleet. Broadside after broadside was delivered. The Turkish Fleet was obliterated. Described as a “massacre”, the battle had unintended consequences. World opinion (especially British and French), turned AGAINST Russia. The two Countries would “”back” The Ottomans as a result of the “one sided” engagement. Both will declare war on Russia and bring about The Crimean War. 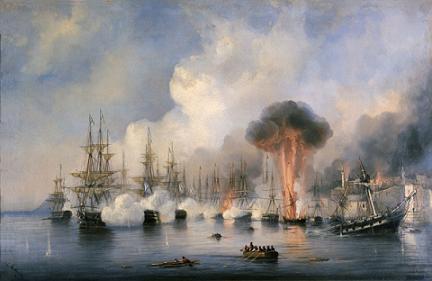