The Battle of New Orleans

A crucial and decisive engagement of The War of 1812 – between The United States of America and The British Empire, The Battle of New Orleans quickly became mythos in The American Culture of The 19th Century. The American victory would serve to end The War and help propel one of America’s most controversial and iconic figures, Andrew Jackson – into The White House as President of The United States. The aftermath would cement American claims of Territories adjoining the recently purchased Louisiana land tracts from France, and extend The United States by many millions of acres.

BACKGROUND:
The fact that The United States and Great Britain came to War so soon after American Independence was a foregone conclusion. The shaky peace between the two Nations was brought about in 1783, with America being  bolstered with trade from France and Spain (long time adversaries of England). A fledgling Navy and Merchant Fleet plied The Seas and European Ports with goods. The modern concept of “international waters” and “territorial waters” was still in it’s infancy. Violations of which by Nations had to be dealt with by a strong Navy or a gifted diplomatic service. A “young” America had neither.

A common Naval custom involving boarding suspected violators of Maritime Laws (proposed, and seldom codified), involved ordering a suspected Ship to “heave to” and be boarded for search for contraband or other such perceived violations. Great Britain’s Navy (while easily the most powerful in The World at the time), was known for being a “cruel taskmaster” to it’s Seamen. Many deserted to other Ships when in Foreign Ports, often being recruited in their “new” Countries Navies or  Merchant Fleets. It was common to board and search such suspected Ships at Sea and arrest such violators. Often, by way of “punishment” goods were confiscated as well. America was preyed upon regularly by it’s former “Liege”.

By way of trade, many Ports in Foreign Nations were pressed upon with heavy taxes and tariffs which regulated strict trade with England only. Those that tried, had to pay heavy taxes. This monopolized trade with England.
The rise of the revolutionary Government of France’s Napoleon Bonaparte saw a series of “Coalition Wars” with England’s as it’s primary adversary. The United States  (avowed as neutral), nonetheless traded and sold with France. England’s illegal search and seizure policies at Sea were met by several Naval battles with America (trying to defend her Shipping rights). Casualties mounted on both sides (mostly due to Britain’s Naval Blockage of The United States) until US President James Madison had no choice  (harangued by Congressional “Warhawks”) – to declare War in 1812.

A SIDESHOW OF THE BIG SHOW:
With Napoleon’s first defeat and exile from France proper, Britain’s populace was War weary. His escape from exile and wresting of power again, precipitated a final Coalition gathering. Hard pressed, British Military assets were again deployed throughout Europe and in the oceans if The World. It saw the War with America as that Country’s long held “dream” of annexation. Of British-Canada. A failed dream attempted in The Revolutionary War, thousands of Troops were marshaled both there and supported by an on-going Naval Squadron from Britain. Nearly 50,000 were amassed for the Invasion of The United States. The initial British plan was to subdue The American Government and move into it’s Southern Regions, reclaiming French and the little Spanish Territories for their own. Reestablishing a “Crown Government” by proxy, the once “wayward child” that was America, would be brought to “heel”. British Forces moved into The North and razed The US Capital (Washington DC). Although America did score some minor victories with regards to Naval Victories (mostly “Fresh Water” engagements), Britain maintained it’s superiority.
Nearly 15,000 of The “King’s Soldiers” landed in Southeast Louisiana (supported by a 60 Ship Naval Force), in December of 1814. Establishing a land Base, the plans of Major-General Edward Pakenham was to move on and take the vital Southern Port of New Orleans. With that, British Forces could eventually control the vital Mississippi River – effectively cutting off supplies to the rest of The Country.

A ”RAMSHACKLE” DEFENSE:
American General Andrew Jackson had been given command of all American Forces in The Region. Numbering barely 5,000 – he was well aware of The British Plan. Supported by the local “color” of Privateers (Jean Lafitte, who established guerilla River tactics), Jackson had portions of his command and Civilian populace work day and night to erect earthen walls (supported by hundreds of bales of cotton). The very few Artillery Batteries were placed at optimum positions. Taking the initiative, Jackson led 2,000 Troops on a surprise attack against The British at their Camp near Versailles, Louisiana. The British were now well aware of The American presence. Orders were given to march against The City.

THE BATTLE:
On January 8, 1814 – British Forces advanced their Artillery and Rocket Batteries within striking distance of Jackson’s Lines. Over half of his Artillery were disabled. His 4,000 Men held their Lines against the on-coming sight of 8,000 British Soldier – on the advance, in line after line. 6 Highland (Scottish) Regiments, resplendent in their Tartan Kilts and the famed 95th Rifles – advanced into the withering fire of The American Infantry (many standing up on the earthen parapets). The Congreve Rockets exploded over the “rude” Fort, giving it an “otherworldly” appearance. Jackson stood on the parapets (foolishly by some standards) – rallying his Forces. British General Pakenham too, led his Forces on personally.
Although The British Line suffered from the effects of American Volley Fire, several Battalions did reach Jackson’s Line. Hand to Hand combat ensued. Bayonet, Sword and Knife – became the order of the day. After several hours, The British Lines faltered. Reserves that should have arrived were late. Coupled with the battle death of Parkenham, British Forces retreated. New Orleans was safe. The British suffered 2,500 casualties in the battle, with American Forces only losing over 300.

AFTERMATH:
Unbeknownst to both sides, The War of 1812 was “officially” over. Diplomatic envoys had reached an agreement which resulted in The Treaty of Ghent. Britain had other issues with the second rise of French Emperor Napoleon Bonaparte, and Britain needed to join yet again with a Coalition of Allied Forces against him. The extension of a War with America was deemed “imprudent” by Parlimentarian moderates. However, news of the ceasefire was slow to reach both combatants that day. Indeed, “hostilities” on minor levels would continue until Congress received word in 1815. The most telling of America’s own war weariness, was the loss of her US Naval Flagship, The USS “President” – captured by The Royal Navy – and never returned, a final “attempt” at regaining lost British “Honor”.
The Battle of New Orleans was seen as a major victory for American Forces – one that may well have galvanized American sentiment into eventually winning The War of 1812. Pressure from Europe (primarily that of The French) would have cause England to all but give up on the collapse of The American “Experiment” in Democracy and self-governing.
The Battle would also serve to cement the future career of Andrew Jackson, who would go on to become The 7th President of The United States in 1829 (holding Office until 1837). His controversial approach to Government would result in nearly 100 years of Government hostilities with Native Americans and establish another future War with Mexico (1846). 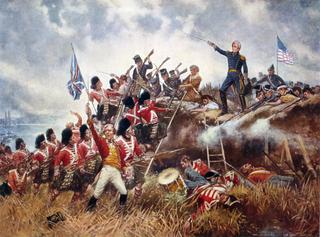