The Battle of Neville's Cross

Occurring on October 17, 1346, The Battle of Neville's Cross was part of The Second War for Scottish Independence (and is often portioned with The Hundred Years War). Fought near West Durham, England - the English forces (commanded by Lord Ralph Neville) engaged the Scottish Army of King David II. With most English resources abroad in France, England's "homeland defense" was administered by it's various nobles of the reign (as was expected). Unknown to England, King Philip VI (France) had sent a plea to Scotland (allied), requesting them to open a second front on English soil. This was designed to hopefully pull back English resources from France. As Winter approached, King David launched an invasion with 12,000 men into England (personally commanding them). King David's ultimate goal was to take the Cities of Durham and Yorkshire. Such a prize would be a great achievement for the Scots. However stealth and tactics were NOT King David's forte. Burning and razing small villages and towns along the way to his objective sent a loud and clear message to England.

The call was answered by Lord Ralph and his army of 7,000 highly trained soldiers! Splitting his forces and making use of small village Militias along the way, he effectively deprived King David of any more trophies (or supplies for that matter). Moving on the Scots flanks, Lord Ralph moved and positioned his army in such a way that it was a surprise for the Scots. On a morning which was supposed to be a simple Scottish raid near Durham, Scottish companies encountered the English rearguard of Neville's forces. They were no match, being driven off with heavy casualties. Upon the companies report to King David, he arrayed his army in line formation. Remembering past battles with the English, rather than rush to met them - he waited.  Soon both side faced each other. After several hours of "psychological warfare", the English forces had had enough of the "protocols". Lines of Longbowsmen advanced past their infantry and release a volley of arrows. This action by the archers was so heated (blocking out the sun, by some accounts), that the Scots broke. King David, trying to escape was captured. He would be ransomed (only after 11 years of captivity!). Lord Neville (to honor himself), had a large stone cross erected near the battlefield (hence its current name). The remains of the cross monument still exist today. 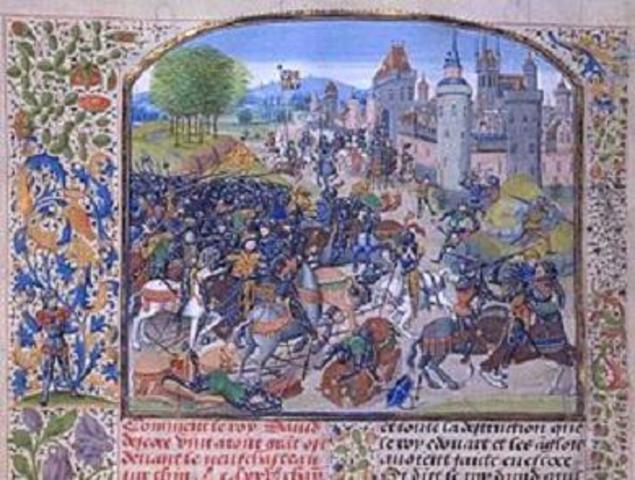