The Battle of Cresson

Fought on May 1, 1187 - the Muslim Ayyubid Army under command of Al Najmi (one of Saladin's commanders), and numbering around 7,000 men had the goal of attempting to try and take Jerusalem. The region was under going intense political strife as a result of the space left after the death of the child - Baldwin V (King of Jerusalem). Raymond of Tripoli had been serving as Regent. With his death, Guy of Lusignan naturally felt that the throne was his. Raymond was having no part with this pretender's claim (no doubt wanting the throne himself). Even high ranking members of The Knights Templar and Hospitallers - as well as The Archbishop of Tyre had tried to resolve the quarrel. The stage was set for the Muslim Army.

Saladin was again angered by the repeated Crusader raids on Muslim caravans in the region. He sent a force to deal again with Raynald de Chantillon (a bit of a rouge Templar by all accounts). Raymond (back in Jerusalem), sent word to Saladin that they should possibly ally themselves (and get rid of both Guy and Raynald). A contingent of 130 Knight Templars and Hospitallers as well as a force of 400 Turcopoles (Turkish Christians) joined in the coming fight. Near the springs of Cresson (not far from Nazareth) the armies clashed. In Muslim fashion, the famed "feint" tactic involving cut and run tactics was employed. The Crusader forces had battled this tactic before - and should not have fallen for it. This time they did. The Crusaders charged prematurely into the Muslims. The Turcopoles were separated from the knights. Encircled, they were slaughters. The Knights (their numbers badly lessened from the cut and run tactics of their enemy), fell next. Only 3 Knights survived!

The loss caused Raymond to rethink his views on the throne (more so because Saladin did not answer his request to ally themselves). Also, he had foolishly allowed the loss of 130 hard needed Knights (that would be costly later). He had no choice but accept Guy as King. The Kingdom of Jerusalem looked at Guy as a traitor. But, the time for retribution was far off. Saladin was assembling another army of 20,000 fighters - the next stop was Hattin! 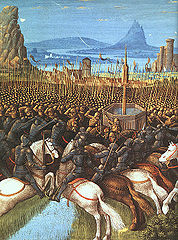