The Battle of Blore Heath

This Engagement was one of the first major Battles of The War of The Roses, an internal conflict for control of the English Throne. It was fought on September 23, 1459, 2 miles east of Shropshire, England. In Command of the 5,000 House of York Troops was The Earl of Salisbury - Richard Neville. The House of Lancaster's 10,000 Men were Commanded by James Tuchet and John Sutton (both Barons). The factions had fought 4 years prior (at St. Albans), which ended in a shaky (at best) Truce. Each side thought the other was breaking the Truce, so they began to arm and recruit Supporters openly. It was just a matter of time before the spark was set to the "powder keg:. Lancaster Nobles heard that Yorkist Forces were attempting to move to Shropshire from Yorkshire. The Lancastrian Forces moved out to meet them.

The barren Heathlands of Blore Heath was an ideal place to "bog down" an Army. The Lancaster Forces established battle lines behind the large Heath rows, located to the Southeast of the Heathlands. Arrayed for battle, they waited. They did not have to wait long. Yorkist Forces spied the Lancaster Banners floating above the Hedge rows. Marching in Formation, it took them precious minutes to realize that their Enemy outnumbered them. Rather than move off and regroup (the old adage to "fight another day"), they proceeded forward. The Yorkist Banners flying, their Drums beating. The Yorkist Forces saw the defensive advantage of the Heathlands, as they did the disadvantages of the Hedge rows. Both Commanders, in Medieval tradition, met on the Field to "Parley" terms. Neither side would withdraw or surrender.

The fight would come! The Lancaster and Yorkist Longbows let loose a withering fire against each other. Their Positions were safety out of range, so neither side did any great damage to the other. Then as a feint, the Yorkist Forces - began to withdraw (or so it would seem). The Lancaster Forces, seeing this - began to advance their Cavalry to the front to pursue. Halfway through the Heathlands, The Yorkist Forces turned and attacked - decimating the Charge. Rashly, Sutton would commit another 4,000 Troops to the Assault.  As insult to injury goes, 500 Lancastrians (perhaps feeling they were losing), turned sides and joined The Yorkist Forces. Sutton's Position was now untenable. He began a retreat. The Yorkist Forces gave pursuit through the night. Most of The Lancastrian Forces were able to evade them. The Yorkist Forces felt a surge of victory from Blore Health. Perhaps it would lead to the English Throne after all. 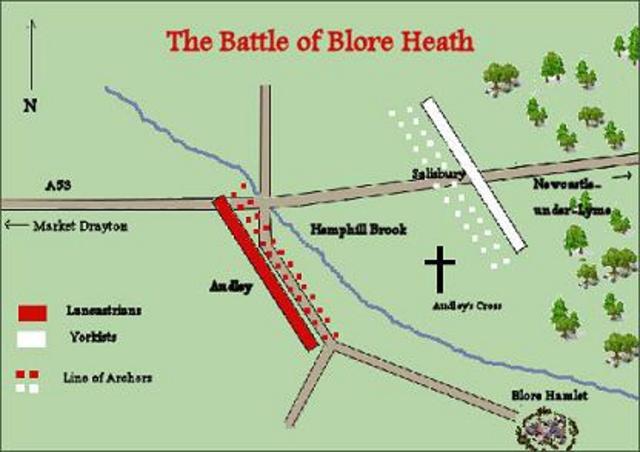