The Battle of Barnet

A decisive engagement of The War of The Roses, it was fought on April 14, 1471 - near Barnet (North of London). The Yorkist forces of Edward IV (England), numbering around 15,000 men, engaged the Lancasterian forces led by Earl Richard Neveille - numbering about 30,000. The Battle of Barnet would be one of the final conflicts of the War. The Yorkist forces landed at Ravenspurn (now East Riding, Yorkshire). Enlisting more men as they marched, their goal was York. Edward made no pretense in hiding his advancing army. Feeling that his forces were sufficient - he changed directions and revealed his true course - London!

Edward encountered Lancasterian forces near Coventry and beat them off. Although Neveille had more troops than Edward, he refused to pursue or commit - waiting on reinforcements from Edwards brother, the Duke of Clarence. Unknown to Neveille, Edward had entered into secret conversations with his brother (pleading him not to commit his forces). The brothers reconciled. Having "turned" Clarence now urged Neveille to stop and surrender. This infuriated Neveille - who continued his march. Hoping that the people of London would shut their doors to Edward and his army, Edward's arrival had the opposite effect. The populace seemed to love Edward - even King Henry VI seemed to welcome him. Suitably re-supplied, Edward and his army started north.

Arriving on April 12, before Edward - the Lancastrian forces formed in defensive lines. Dense woods protecting their flanks. Well aware that Edward's forces were advancing toward them. A dense fog began to creep across the field.
On April 14, cannons belched forth fire from both sides. The thickening fog (couple with the smoke from the artillery) completely obscured vision. Soon the Yorkist lost sight of their lines. Confusion led to faltering and faltering led to a fallback. Seeing this break, the Lancasterians exploited this breakdown in formation and charged the field. For some reason the Lancastrian forces stopped on the filed to loot the Yorkist bodies left on the field. It took some time for the commanders to restore disciple to the 800 odd men.

As a play of fate, the Lancastrians were now in the same position as the Yorkist forces had been - in the middle of a field with zero visibility. Now the Yorkist forces returned "the favor". The Lancastrian lines, knowing that the enemy was still out there, began to fire their guns - into their own confused troops. Edward, seeing this - ordered his forces into the fog and to attack. The Lancastrian line began to dissolve. Neveille was the last left, pulled down from his horse, a Misericorde ended his life. When Edward came across his corpse it was so badly mutilated by Yorkist forces it was unrecognizable. The Lancasters lost some 2,000 men. The House of York, a sparse 600. Strangely, Edward did not request "The Traitor's Death" for all the captured noble commanders. They were imprisoned and ransomed. 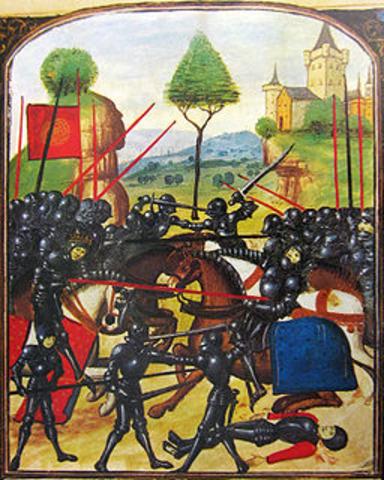