The “Batavia” was an Armed Dutch Merchant Ship, launched in 1628. She displaced some 650 tons and was 185 feet long. She stood “huge” at 180 feet (beam). Armed with 24 cannon of various poundage, she easily carried around 340 crew (and passengers). Owned by The Dutch East Indies Company (a Trade concern) - “Batavia” would become somewhat of a legend herself. The ship was loaded with silver and gold and supplies ample for trade and survival. So as to the idea of the Captain and his Lieutenant. They conspired to steal the ship and it's cargo and start a new life elsewhere. The plan was simple. The Lieutenant would get the crew to see the Captain as a cruel Master. This would lead them into mutiny. Of course, the Captain would not be hurt. However, before the plan could be “”sprung”, “Batavia” was caught in a storm and struck a reef near Western Australia.

The survivors making their way on shore, would undergo months of hardships (little food, water, hostile Natives and the “real” Mutiny that developed and caused several murders). Eventually rescued, some the the crew informed The Dutch Government of the original plans of Mutiny. Soon Both Captain and Lieutenant were informing against each other. The “Batavia” story ends with it's treasures lost and ALL of the surviving crew (Officers included), being executed. In 1974, “Batavia” was rediscovered and some of her artifacts were recovered. In 1995, a full-scale replica of the ship was constructed as close as possible to the original design. 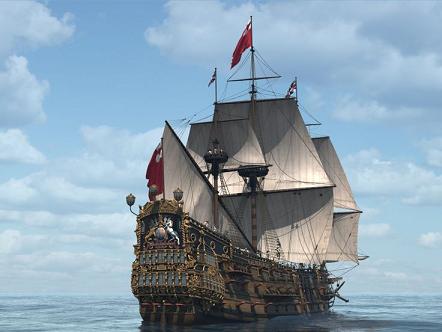