While this Legion can trace it's early roots to The ''Arab Spring'' of World War I, when a British led Native Force of bonded Tribesmen united (briefly), to attack German Allies The Turks (Ottoman), The Arab Legion was formed in 1920. With British interests firmly in The Middle East after The War, they occupied The Trans-Jordan Region. Additionally, with much of Her Forces deployed home after The War, England was compelled to raise local Militiamen to serve. The Arab Legion was thus born.

Commanded by British Officers and NCOs, The Legion served as protection in The Region against the many Regional Tribes that vied to control The Trans-Jordan. In truth, much of these coups were present before The War. Without a need to unite against a ''common Enemy'', the need for a local Force to put down rebellions and police The Region was needed.

At their highest recruitment, The Arab Legion mustered nearly 6,000 soldiers (arranged into four Battalions). They maintained a separate Artillery and Light Armor Detachment. Paid (in part), by The King of The Trans-Jordan (while British serving Officers and NCOs were paid by England), this was soon to play an odd diplomatic predicament.

With World War II, many Arab Legions Officers commanded Regular British Units – but maintained their commissions (and control) of their Legion Commands. In essence, they were being ''paid twice'' and ''loyal'' to two Monarchs. While the need to control The Middle East and deprive it to German resources was tantamount, no enforcement of British Regulations regarding holding a Commission (and allegiance) to another Regent, was investigated.

The Legion fought many important actions against German Occupation between 1942 and 1944. They were instrumental in holding Iraq and Afghanistan strategically. However, the Allegiance Regulations came into glaring light with The Arab-Israeli War of 1948. The Legion fought against British Jewish Allies, in The Jordan;s attempt to wrest The Jews from territory promised to them by The British Government after World War II. In short, British Officers were commanding a hostile Force in active combat against British Allies.

The British Government ordered all serving Legion Officers to immediately leave their Commands of Legion Battalions. Duly done, most still commanded their Battalions against orders. Later, these Officers citing the ''great loyalty and respect'' they had for their soldiers. Later, several of these British Officers would be brought to Administrative Court Trial (but other than sanctions, none were court-marshaled).

With the establishment of The Jordanian Army in 1956, The Arab Legion would be absorbed into this formation. The term ''Legionary'' was still in use by component Forces as late at The 1967 ''6-Day War''. 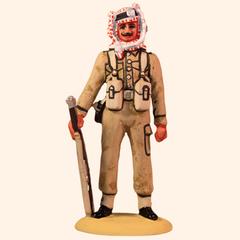