The Angel of Mayre's Heights

The ''Angel'' of the Title was none other than Confederate Sergeant Richard Kirkland of The 2nd South Carolina Infantry Regiment. His kindness to wounded Enemy (Union) soldiers earned him the nickname of ''The Angel of Mayre's Heights''. His is an unusual story of bravery and kindness in an otherwise cruel and horrific American Civil War.

Born in Kershaw County, South Carolina in 1843, Kirkland came from ''simple Farming roots'', as was typical for a ''rural Southern Boy'' in that part of The American South. He receives a very ''basic education''. Little is known from Kirland's past other than he was known to be a ''gentle and God fearing'' young man. Like so many other young men in 1861, Kirkland answered The Call for Southern Volunteers to ''defend The Southern way of Life''. He enlisted in The 2nd South Carolina Infantry. His good nature and somewhat ''natural'' Leadership abilities earned him a promotion to Sergeant of his Company. He would see action at several early and epic battles, the first being Bull Run in 1861 and later Antietam in 1862. His Regiment was detailed to support Confederate position forming at The Town of Fredericksburg, Virginia. A major Union Army was planning to land near the Town and take it as a precursor to a march on The Confederate Capital of Richmond, Virginia.

Kirkland's Regiment formed part of a much larger Confederate defensive position below a natural foothill overlooking The Town of Fredericksburg, known as Mayre's Heights. A series of stone walls had been erected for protection. The Heights gave way to a vast expanse of open ground – by which The Union Army had to use to access The Town. Wave after wave of Infantry Units attacked the well protected Confederates. After the end of the day, at least 8,000 Union wounded and dying lay strewn across this field.

Those capable of walking (or crawling) away to Field Hospitals did. Many thousands could do nothing better than moan through the night of their wounds – most parched and suffering from lack of water. Neither side would yield even a ''White Flag'' to retrieve the dead and dying. The cries of the wounded was too much for Sgt. Kirkland. He asked Commanders if he could help the wounded Union Soldiers, but they refused. After much repeated prodding, they allowed him too – under his own peril.

Gathering as many canteens as he could carry, Kirkland crawled to those Union soldiers nearest his position. Giving them water, he realized many would freeze in the December cold. He made repeated trips back to his Lines – gathering blankets etc. and giving them to the wounded – and dying. No Union shots were fired as even his Enemies gave him respect for his courage and kindness. It was his Enemy that nicknamed him ''The Angel of Mayre's Heights''.

Kirkland would continue onward with his Regiment from Fredericksburg. His courage and leadership would earn him a promotion of Officer (Lieutenant) of The Regiment. He saw battle at both Chancellorsville and Gettysburg. It was at Chickamagua, Georgia (1863), when Lt. Kirkland was leading his Troops into battle, that a Union Ball killed him. His remains were recovered and sent home to South Carolina, where he rests today.

When Fredericksburg was made into a National Battlefield Park – his legend still endured. In 1965 a massive statuary monument was placed, honoring Kirkland – The ''Angel of Mayre's Heights''. 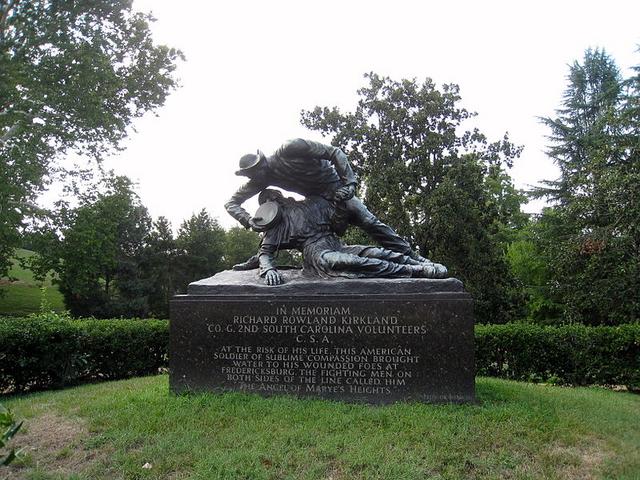