The existence of The Texas Dragoons in The War for Texas Independence of 1835-36, while acknowledged, is debated in terms of the uniform they were ''supposed'' to have worn. While some cite that some did – in fact wear the following uniform, others state that it would not become fact until 1837 and afterwards (ending with The Republic of Texas being annexed into The United States). Described as being modeled from The US Dragoon Uniform of the late 1790s and early 1800s, the Coat was Green, with Yellow-Gold Facings. A Hard Leather Cap Helmet with Plume was worn. Buff colored Trousers were added with knee high black leather boots. Weapons used were typical to Mounted Dragoons and Cavalry of The Era. These included the staple Saber and Musketoon (.48 Caliber Version). Side Pistols were carried by Officers and Men alike. These Uniforms (or rather Orders of such), were placed for manufactured in Kansas City Missouri in the 1839. The Texas Dragoons were also the first official Government Military Force to carry The ''Lone Star Flag'' or ''Bonnie Blue''. Which was a Blue Field in it's entirety with a large 5-Pointed Star (which was either White or Gold). 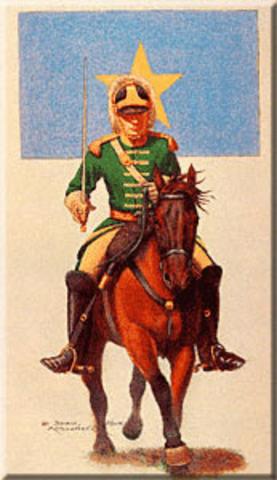