Dubbed “Little Mac” and “Young Napoleon”, Major-General George McClellan was an American Civil War Union Army Commander, Railroad Executive, Civil Engineer and Politician. A Graduate of The US Military Academy at West Point, he served with distinction during The Mexican War of the mid-1840s. Resigning his Commission after The War, McClellan became a Railroad Executive. Always having Political ambitions, he ran for Office – serving as Governor of New Jersey as well as two failed attempts at The US Presidency. With the start of The American Civil War McClellan was offered command of New Jersey Militia Forces. Early victories found him quickly coming to the attention of The American People. President Lincoln would promote him to command of The Army of The Potomac.

McClellan was known for his often over organizational abilities. To be fair, he did turn The Army of The Potomac into a Modern Army. His major issue was his inability to maintain pressure on an exploited Enemy. Although his strings of early victories were well heralded, it was The Battle of Antietam (Maryland) which was his undoing. Failing to pursue a weakened General Lee and his Army, would lead to McClellan’s removal from Command. Remaining have on The Army, he wad an outspoken critic of Lincoln.

McClellan served as New Jersey Governor and was responsible for several large scale Civil Engineering Projects on The East and West Coasts. He would die of an unexpected heart attack at 58 in 1885. His flamboyant personality was well reflected in the 4 known Swords of McClellan. Most of them were Presentation Gifts, with the most ornate being made by Ames and embellished by The Tiffany Brothers. This was a 36-Inch Model 1862 Officers Dress Sword. It featured a “D”-Guard with a Gold Filigree Hilt of 18k Gold. The Scabbard was Silver. McClellan also had a Cavalry Officer Sword made similar. His everyday Sword was a Standard Infantry Sword  (albeit custom made). All others are in Museums in The US. 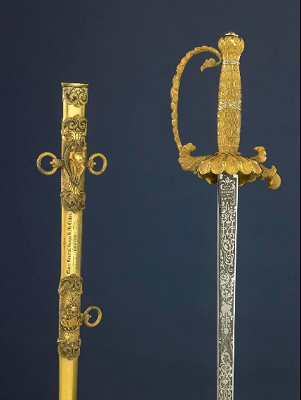