Recruited by Pope Julius II in 1505, the use of Swiss Infantry (mercenary forces) in Italy was not a new idea. The Swiss were the apex of professionally trained and motivated soldiers that could be found anywhere. They were known for their innovative battlefield tactics and the use of the most "modern" weapons of the time. 150 of these soldiers were chosen to protect The Pope and The Vatican in Rome. They were also given the title of "Defenders of The Church's Freedom". This was put to the test in 1527, when the armies of Holy Roman Emperor Charles V captured and sacked Rome. 189 Swiss Guardsmen (to a man) died to make sure The Pope could escape capture (and possible death). From that time forward, The Swiss Guard have served The Pope and his Cardinals. They are noted for their Renaissance style uniforms, weapons and armor (all used for ceremonial uses now). The Guardsmen are a modern military force (while being the World's smallest). A candidate must be 18, Swiss, a practicing Catholic, unmarried (initially), and have served in The Swiss Army (and honorably discharged). An Oath of Loyalty is still sworn to by a Candidate, swearing to protect The Pope and his Cardinals - with their life, if necessary. 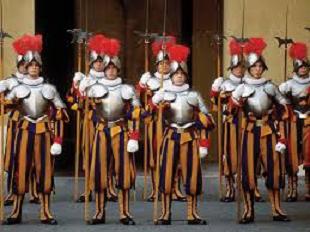