A little known but effective Light Cavalry that was developed in Finland, The Hakkapeliitta were a semi-Mercenary Forces that were purchased by Sweden and used with great effectiveness in the 16th and 17th Centuries. The Hakkapeliitta were often used in concert with The Swedish Carolean Infantry. As Light Cavalry, they were used basically as Scouts and for Flanking Protection. Known for their aggressiveness in combat, The Hakkapeliitta used a standardized tactic, by which they would Charge you within 100-yards of their Enemy. Firing Pistol (Doglock), they would switch to Sword and Saber and Charge yet again. The Hakkapeliitta, although Light Cavalry - wore heavy Armor Cuirasse. They used Forearm Vambraces and the well known Morion and Cabasset Helmets. They were at their apex during The Thirty Years War. 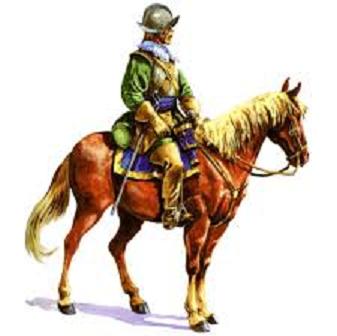