Also known as an "Auto-Cannon", The Swedish made Bofors Gun was designed in 1934. Based on the popular "Pom Pom" Guns of the 1920s (by their distinctive sound when fired), they were single and multi-barreled, rapid fire, weapons systems. The primary goal of the Bofors was to engage and disable or destroy both aircraft and small, light-armored attack Naval Craft. At the start of World War II, The Allies did not have a reliable Auto-Cannon. The basic design of The Bofors were incorporated into both The American and British Military. The Bofors Gun was a versatile weapon, which could be Ship or Land-based mounted.

In it's Ship-board configuration, The Bofors could be deployed in twin or single mounts. Most Allied Naval Warships used them for protection against enemy aircraft. These Bofors versions could reach up to 11,000 pounds. Land-Based versions could be mounted on a wheeled transport, which could be anchored by plates, into the ground (then removed for transport very quickly). Lansing versions could teach an average of 4,000 pounds. Although 40 mm rounds were the norm, versions of different calibers were constructed. They could reach elevations of 90 degrees and had a cyclic rate of 330 rounds per minute. The could achieve ranges of 23,000 to 41,000 feet.

The American Chrysler Motor Company was licensed by Bofors, and produced over 60,000 weapons and 120,000 barrels for War Production in 1943 alone. The smallest variant was a 6-pound version. 8 other varients were known to exist. The weapon is still in existence in some form today. 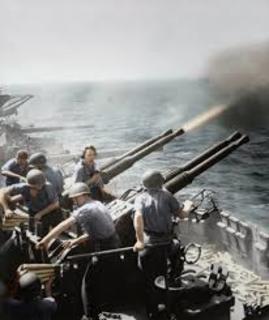