Standard of The Joseon Dynasty

The Joseon Dynasty of Korea, ruled for close to 500 years (1392 - 1897). One of the more successful, they expanded their control far North (close to China). They were also instrumental in the relocation of their seat of power to present day Seoul. The early Joseon did not use the title of "Emperor" (this was given to them in 1899 as a belated honor). The Standard was a 6-foot by 5-foot Red Field. The entirety of the perimeter featured a series of Black Pinons. In the center, a circular patterned White and Gold Sun was placed. This was surmounted by 8 "kwai" in Gold. This was in keeping with the I Ching philosophy and symbolized Earth elements as well. The Joseon Standard changed many times in it's history before it would eventually evolve into the current National Flag of South Korea. 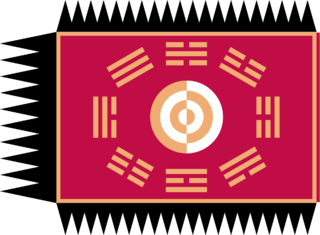