One of the largest of the former Knights of Malta’s Wignacourt Tower Defense System structures, St. Agatha’s Tower is a Bastioned Watchtower built in 1647. It is located on The Island of Malta. Built by Order Knight and Architect Antonio Garsin, The Tower was designed to be a crucial component in The Maltese Knight Defenses against Ottoman attack of not only Malta, but of nearby Gozo. Known as The “Red Tower” due to the use of Red hued Limestone, St. Agatha’s was originally planned as a Device Force (Artillery Fort). Each of it’s (4) Squared Towers are 40-feet in height and support up to 1-ton of support Artillery. A Redan was constructed to slow any Infantry attacks to The Towers. This was reinforced by a stone entrenchment (which could have been used as a Wet Moat). Up to 30 Knights could garrison St. Agatha’s Tower. It has remained an important piece of Maltese Defense with French and British Occupation well into the 19th Century. It has been renovated and reinforced many times since the 17th Century. The Towers are still under control of The Maltese Government (which is currently renovating The Towers). 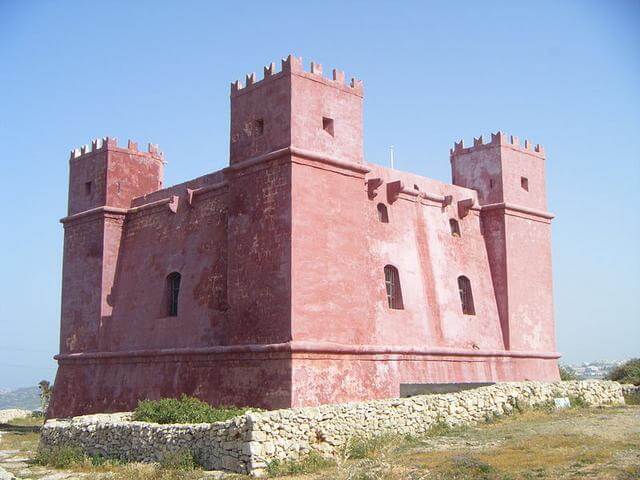