Although not of Ancient Roman development, they refined the Formation. A variation of "The Tesudo" tactic, this Formation involved the use of several Ranks of Soldiers aligned in two two lines. The Front Rank would kneel, using their Scutum Shields as a form of "portable Wall". The 2nd Rank (behind the First), places their Shields over the heads of the Front Rank, forming a type of "shelf". Thus allows the 2nd Rank to throw their Spears, and still be protected from Enemy "Missiles". Resupply was achieved by the Lower Rank. All Roman Soldiers carried multiple Spears. This also allowed the 2nd Rank to throw multiple times. Any fast advancing Enemy to the Lower Rank would be impaled on Roman Spears, fully extended outwards.The Spear Wall could be as small or large as was needed. Many Historians consider this tactic an early form of the much later "Volley Fire" Tactic. 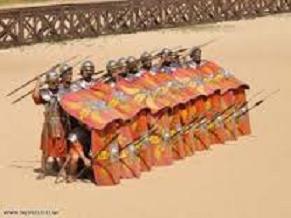