Much has been written on the Native American Lakota Sioux Holy Man Thathanka Iyotake, which was better known to History as Sitting Bull. His life has merged into Legend and at times Myth. Born around 1831 in what would become Dakota Territory (US), his Father named him “Hunjkensi” or “Slow” for his “unhurried” nature. At 14, he “Counted Coup” for the first time, and was later awarded his “new name” of “Sitting Bull Who Sits Down”. However, the Sioux language (which can be long at times), was abbreviated by his people into simply “Sitting Bull”.

Sitting Bull was prone to “Visions” or premonitions which were often said to come true. As such, he was looked upon as a Holy Man. As time progressed, many Chiefs would consult him before The Tribe contemplated going to War. In 1862, although The US Army was taxed by The American Civil War with The Southern portion of The United States, The Sioux and Cheyenne Nations went to War with The Federal Government (The Dakota War). This engagement caused an overall loss of 2,200 US Soldiers during it’s course.

After America’s Civil War (despite a Truce), The Sioux and Cheyenne again went to War against an encroaching US Government on Sioux Territory. Under the leadership of Chief Red Cloud, “Red Cloud’s War” of 1866-1868 would usher Sitting Bull into a magnificent tactician – based on his uncanny ability at “Visions”. The War would loosely united The Sioux, Cheyenne, Hunkpapa and Blackfoot Tribes against The US Army.

Sitting Bull would lead many Warriors in attempts to stem the flow of White Settlers into Sioux Territory. As such, yet another Truce would be initiated and broken again with The Sioux ushering in the final great War between The Tribes. This was The Great Northern Plains War. It would also be the last great “swan song” for The Sioux Nation. Gold had been discovered in The Sierra Nevada Mountains (which spurred a mass migration). In 1874, Prospectors illegally entered “protected” Sioux Territory – the scared Black Hills. The Sioux waited patiently for The US Government to enforce it’s Treaty against White violators. They didn’t (and those that they did, were given minor fines). The Sioux went to War. The Government responded in kind.

In 1876, a large Expeditionary Force under General Alfred Terry, was sent into what would become Montana Territory, with the goal of forcing The Sioux back onto Reservations (that they had abandoned due to lack of Treaty enforcement). One of these smaller Expeditions would become the impetus for all out War with the Sioux later. Sitting Bull had a Vision. In it, he saw hundreds of Locusts descend upon The Sioux, who in turn would “sweep” them away. The “Locusts” were led by a “Great Yellow Haired Warrior” (who too would fall). Motivating the young Warriors, Sitting Bull (with such Warchiefs as Crazy Horse), would catch an over-zealous Lt.-Colonel George Custer and 256 of his Command at The Little Big Horn. They would slaughter The 7[sup]th[/sup] Cavalry to a man. This was a great victory for The Sioux. The Government retaliated.

From 1877 to 1880, a systematic and violent series of reprisals were initiated against The Northern Tribes (The Sioux in particular). Unable to withstand the onslaught, The Lakota surrendered and entered into Reservation life. Sitting Bull (at first arrested and later imprisoned at Ft. Robinson, Nebraska), was released due to fears that he was still looked upon as a “Rallying Point” for his People. Sitting Bull was by now an “Old Man” and wished to fight no more. The early 1880s saw Sitting Bull become a “Celebrity” to White Culture. Having met William “Buffalo Bill” Cody some years earlier (and whom was one of the few “Whites” Sitting Bull liked), was even given a “Job” as an attraction with Cody’s “Wild West Extravaganza”. Sitting Bull was given the overall credit for the destruction of Custer. This gave Sitting Bull an almost “magnetic draw" by American Culture at the time, which made large sums for Cody. Although Sitting Bull was paid, his concept for money was lost. He gave most of it away.

Returning to Ft. Yates, South Dakota (tire of his Celebrity), Sitting Bull was seen by the youth of his Tribe as (to which The Government feared), a focal point for the rise of The “Ghost Dance” Movement of the 1890s. The Movement promised to give The Sioux Nation back it’s lands and prestige (taken from them by The US). If Sitting Bull could be persuaded to serve as it’s Leader…….. On December 15, 1890 a detachment of US Soldiers and Native American Reservation Police Officers surrounded Sitting Bull’s home. He was to be taken into custody. A fight ensued outside his house and (claiming that he resisted), Sitting Bull was shot in the head. He died. The news swept The Country. His death was viewed with sadness (and relief, by some). The Ghost Dance Movement would end violently with The Battle at Wounded Knee. Although buried at Ft. Yates, later – Sitting Bull’s relatives exhumed what is though to be his remains (his Grave was perhaps improperly marked). He was reburied near Mobridge, South Dakota – where a Monument was erected in his honor. 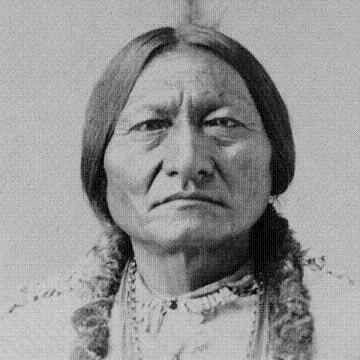