In terms of The American Civil War, the “Father “ of The soon be be Union Army Signal Corps, was Major Albert Myer. Myer (a Surgeon by trade), had pioneered new and innovative techniques to assist hearing impaired Patients to communicate. Upon enlisting in The Army, Myer began to experiment with a system of field communication, in which Commanders could communicate at distance (from the field of battle). Myer incorporated a single flag system known as “The Wig Wag”. Using pre-planned movements based on alphanumeric principles, messages could be sent to a specific point (to be interpreted by a trained decoder). The Army initially was not impressed (being lulled with the invention of the Telegraph and Balloon Corps). Allowed to test his system in The Navajo Indian War of 1860, Myer proved the systems effectiveness.

Still difficult (even with major Staff Officer endorsement), The Army finally gave in to Myer. The Signal Corps. (as it was named), would be messed into the new Telegraph and Ariel Corps. A major problem for The Corps. Involved the finding and training of adequate staff. Myer was not an organizer, and soon lost his command to a more “seasoned” Leader, Major William Nicodemus. The Corps. Under his command would grow to almost 2,500 trained Officers and Men. An additional flag system was incorporated, which involved the use of a 2-flag system. Constructing “Signal Towers” in the filed, Corpsmen would climb to heights of 35 to 45 feet (for better view). Standing on platforms, they would send their messages. This style was similar to the much older Naval use of Pinafore. In addition to training in flag use, Soldiers also needed to be trained in the use of a Cypher Disk. These portable rotating disks enabled the Decoder to “translate” the Code. The Confederate Army likewise realized (like Myer), the need for good battlefield communication.

The Confederacy embraced The Signal Corps. Early on in The War. Captain E.P. Alexander (trained by Myer before the War), took his ideas straight to President Jefferson Davis (The South). Embraced, this was unusual for Davis (who as Secretary For War in 1860) – fought against Myer. Alexander set up several Communications Companies for The South. It was said that The Confederate Signal Corps. Had a vast communications “net” that stretched to Canada. However, with much of The Confederacy's records lost (destroyed or burned), after the War, their Signal Corps;. History was lost. 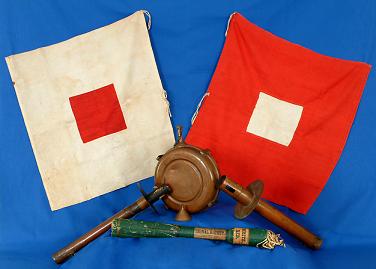