''Ship Money'' was a form of Royal Taxation instituted by The English Monarchy around the 12th Century AD. The Tax was designed to raise monies needed to help built and in some degree, maintain a Naval Fleet for War. This Tax was at times excessive and was not only leveled against The Subjects of England, but it's Nobility. ''Ship Money'' was seen illegal by The Nobles and in direct opposition to The Magna Carta of 1215. With The establishment of a Parliament in the 13th Century, it was thought that A King or Queen could not call for such a Tax without Parliament approval. This was yet another example of ''Divine Right'' invokes by English Royalty.

While many Historian can argue the genuine need for the maintaining of such a Navy, taking into account that England (not being a particularly ''strong'' Nation), had to protect itself, it was the Tax that was the issue. Often leveled at times of distress, (Famine) or during periods of Conflict bot necessarily supported by The People, The ''Ship Money'' Tax would continue.

By the 1630s, King Charles I first raised The Tax to support His dealings with Spain's King Philip (who had entered into a War with The Dutch). An estimated 200,000 Pounds were collected for this somewhat ''back room'' deal. Several Nobles actually broke suit against The King in 1637. And while The Noble had a ''compelling'' Case, they lost. This sent a tide of dissent causing many Nobles to refuse 1790to pay The Ship Money Tax. Regardless, The Tax would still remain an English Law until 1689, when it was repealed by Parliament. 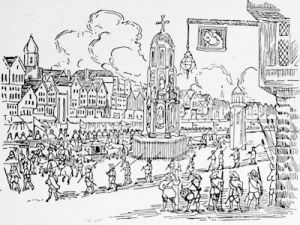