In Medieval fortifications terms, the Shield Wall was the highest and strongest wall or tower section of a castle or related fortification, that was built onto a hill or mountain. Often referred to as a Mantle Wall, it was primarily a Germanic feature (due to mountainous terrains). Shield Walls were not common in English castle building techniques. An example of of the few in England would be Tantallon Castle (East Lothian, Scotland). The primary design cause of the Shield Wall was in response to the increased use of Trebuchets in siege warfare. By incorporating the mountain or hillside into the wall system, a greater strength to the wall was afforded. Shield Walls were also designed with wall walks for use by archers and other missile troops. Normally two towers were built into the wall (one at each end). This design was popular in the 12th Century. 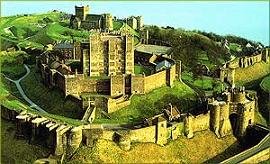