The Sciuta Tower System was a series of Offensive, Defensive and Forward Observation Posts devised and constructed by Ottoman Forces, during their initial occupation of The Island of Malta and it’s surrounding smaller Territories. The Sciuta Towers date regionally to the mid-16th Century (1638). In construction, these Towers were made from Regional Limestone and Sandstone. Rectangular shaped, the Foundation Base was around 40-feet in width, with the height varying – but not exceeding 35-feet. Some (not all) of The Sciuta Towers were multi-leveled. Traditionally, they were to be staffed by 4 Soldiers. Although capable of small primitive Artillery deployment, these Rowers were designed to serve as “early” warning Observation Posts, watching for possible Christian Crusader Invasions from The North. After The Christian Knights of St. John (later Malta), took over Malta and it’s surrounding Islands, many of The Sciuta Towers were dismantled. However some of their design style was incorporated into The De Renin Tower Systems used by The Knights of Malta. Very few non-modified Sciuta have survived to The Modern Era. 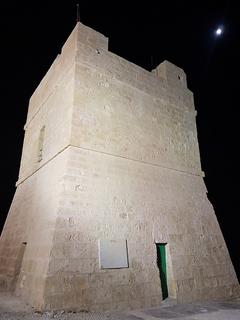