Located in Averio, Portugal - Feira Castle dates to a Pagan Temple of the 7th Century. Later, a Christian shrine was erected. In 865 A.D. - a stone fortress was commissioned under Alfonso III. Renovated many times during it's history, Feira Castle is of the Hilltop design. Featuring 35-foot tall defensive perimeter walls 14-feet in places, it also features a dry moat. 4 Squared Turret Towers (protected by Barbicans), completed the initial defensive measures. A large, 3-storied Donjon occupies the Main Ward. In addition to many smaller Chapels, Feria Castle had all other interior industries to support castle life. The Castle was a main offensive position for Christian Forces during The Reconquita Period. In 1000 A.D. - Moors Forces besieged and razed Feria Castle twice. By the 15th Century, it was renovated in a Royal residence. It is currently one of Portugal's most popular Medieval Castles for tourism. 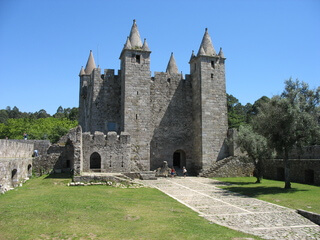