The Mission of San Gabriel (named for The Archangel Gabriel), was one of the first founded by Fr. Junipero Sierra, during the first of the “Military Expeditions” that headed north from Mission San Diego. Founded in 1771, the Native Tribes in the Region (Gabrelinos) were NOT friendly towards the Spanish “incursion”.Legend tells of Sierra spreading out a picture (painting), of The Virgin Mary. The beauty of the painting so impressed The Natives, that they allowed the Spanish to settle! Originally a rude wooden structure with a palisade, the nearby water supply was adequate enough to built a Mill.

Land was fertile and soon a thriving Colony was established. A brick and mortar structure was erected by 1778. Water was “pumped” into the Mission via a stone aqueduct system which stretched from the San Gabriel Mountains. Known for mass production of wine, candle wax and beef, the Mission San Gabriel produced so much excess that it was used to supply MANY Northern Missions. The Mission itself boasts over 25,000 baptisms in it's long history.

The Mission suffered little under Mexican Rule, and was among the first to be “returned” to The Catholic Church in 1862 by US President Lincoln. Today, it is part of a function Catholic Parish, - although the Mission proper is a Museum (as is the adjoining Cemetery, which – up to 1990, still buried members of Fr, Sierra's Religious Order). In fact 4 of Sierra's subordinates were buried under the Altar of The Mission, as was the Custom). The Cemetery (or El Campos) – is also the resting place for over 6,000 Native American converts!). 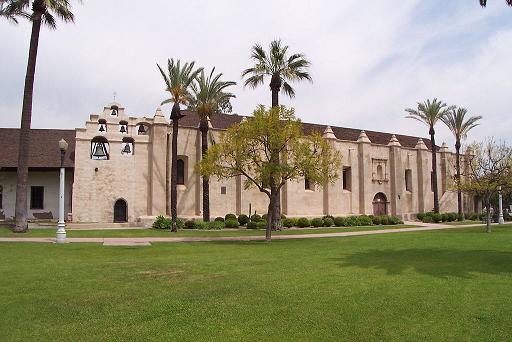