Simply “The Mission of Carmel”, it was founded by Franciscan Fr. Fermin Lasuen (a subordinate of the great Priest/Explorer Junipero Sierra). The Mission served as the Headquarters for all of the established California “Alta Missions”. It was at Carmel Mission that Fr. Sierra had first envisioned his dream of establishing the many Missions throughout “The New World” (and where he would eventually die and be buried in 1784). Built in 1771, Carmel Mission was constructed with a heavy influence on Spanish/Moorish design (from The Reconquest Period). It's domed Bell Tower features twin Bells from Spain, cast in 1760 and shipped to California.

Having learned that there needed to be a separation between Spanish soldiers and converted Native Americans, greater efforts were taken to avoid the revolts and massacres that had previously occurred in other locations. The local land was superior for agriculture, and soon the defensive palisades were removed for cultivation. Most construction and farming was accomplished by trained Native American converts. Somewhat thriving, The Mission boasted some 940 inhabitants (at it's peak). By the early 19th Century, French Privateers had begun to raid many Northern California Ports and Harbor Towns. As a result, many resources were relocated well away from the needed supply system of Mission Carmel. As a result, The Mission was abandoned until Mexico reclaimed it after their Independence.

Still under control of The Catholic Church, Mission Carmel was (for the most part), left alone during Mexico's “Confiscation Period”. However, by 1863 – without Church help (and monies) for renovations, Mission Carmel had fallen well into ruin. With US President Lincoln's Act which relocated all Spainish Mission back to Spanish control , by 1884 proper renovations were begun. Designated a “Minor Basilica” by The Church in 1960, it is the only “Old Spanish” Missions actually visited by a Pontiff (Pope John Paul II in 1987). A major source for an excellent collection of Religious Art, The Mission is still an active Parish within The Catholic Church. 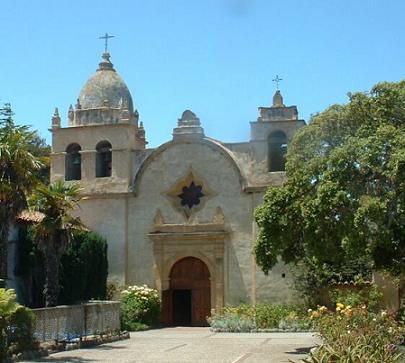