Born in 1851 in Mitchell, Indiana - Sam Bass lost his parents early in live. Sent to live with an abusive Uncle, he could not wait to get old enough to run away. His childhood wish was to live the "free life" of a Cowboy. He ran away in his mid-teens and made his way to Mississippi (taking work in a Sawmill). Eventually, he made his way to Texas, and made his dream a reality - as a Cattle Drover.

Just why Sam Bass turned to a life of crime is unclear - but in 1876, it happened. He and a soon to be Conspirator were "trusted" run a herd of cattle from Texas to Missouri. Once paid, they were to return to Texas. Bass had learned of another Beef Procurement Company willing to pay much more per head. Diverting from their route , Bass sold the herd and he and his Associate netted $8,000 (USD). Bass and his man took the money and headed farther West - now wanted men.

Making it to the "Sin City" of the Era - Deadwood, Colorado - it took little time for Bass to lose all his money on gambling, Whiskey and other "diversions". Needing money, Bass set about to form his Gang. Settling on Stagecoach robberies, The Bass Gang spent the end of 1876 as the scourge of both The Well- Fargo and Butterfield Stage Lines. However, their takes were never quite large enough. Bass changed his direction. They would rob trains.

1877 was spent robbing The Union-Pacific Line. In fact, on one "job" - The Bass Gang netted the sum of $1 Million (USD) - The largest train heist in history. Past this point hiwever, Bass and his Gang never really stole more than $50,000 (USD) total. Having enough, The Union-Pacific hired the infamous Pinkerton Detective Agency. Not much more different in their tactics than the Outlaws they hunted, the Private Police Force converged on every "tip" leading to Bass.

In an ambush near Texas (to where Bass and his Gang were heading to plan another heist), several of his men were captured. One of the Gang Members father was very sick and in custody of The Pinkertons. The deal for the man was simple. Deliver Bass or his father would be denied medical attention and die! The criminal had no choice but to inform
In 1878 outside of Round Rock, Texas - Bass and his men were ambushed by several local Sheriff Posse and The Pinkertons. Bass as shot in the back but escaped. Later, the body of the 27 year old Outlaw was found in a nearby pasture. So popular was Bass with locals as a "Anti-Hero", that over the years, his tombstone was literally torn apart for souvenirs. A new larger granite one was erected in the 1920s - complete with an accompanying iron gate to protect it. 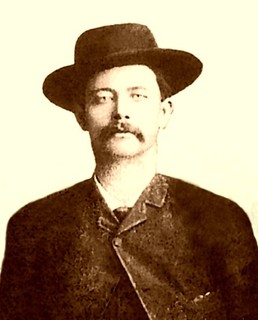