Perhaps more Structure is more known to The World (thanks to Hollywood Films), that that of the 19th Century American Western establishment called The Saloon. Derived from the French word “Salon”, this was a private room where one either entertained a small group of friends or otherwise, relaxed by one’s self. In American Culture, The Saloon would evolve into a colorful (albeit dangerous) environment. The first known establishment of a Saloon was in Wyoming Territory in 1822. This was nothing more than a Tent. Similar to a Sutler Store, food and supplies were for sale to Settlers, Trappers and Soldiers. Of course, alcohol became readily available as well. Chairs or benches were placed behind the Tent, were one sat and drank.

With the establishment of “Boom Towns”, which were crudely built Tent and wooden settlements which quite literally “sprang up” overnight, these Communities capitalized on Cattle Drives and Gold or Silver discoveries. Monies and “fortunes” were made overnight. The Saloon was the first place a Man went for "Adult Entertainment". One could drink alcohol (which was frowned upon in polite Christian Society), eat and even get a Bath in a Room. He could Gamble (play Cards), strike up or renew friendships and even listen to Music. Of course, the underlining highpoint if The Saloon, was “Female Companionship”. Saloon Girls were hired for their (hopeful) beauty and other “charms”, to entertain Customers. Most often they were Prostitutes that had Rooms upstairs. The main goal of The Saloon was to make money by all means.

Permanency of some of these Towns (many Tent Cities disappeared very quickly with changing fortunes), gave some Saloons the ability to become permanent building in Town. Often, they were very plain on the outside. But lushly appointed on the interior. Soon more advanced Gambling (Blackjack and Faro), became the main attraction. Into this environment naturally, came the “seedier” forms of Western Society. Outlaws, Thugs and the like, soon were well known fixtures in a Saloon. So too was the Gunfight. Alcohol coupled with a bad streak at Gambling, led to fights. Fights lead to Knife and Gunfights (often inside). Not carrying some type of weapon into a Saloon was dangerous.

With the rise of Temperance towards the end of the 1880s, many Saloons were targets for attacks. Many were set fire and destroyed in an attempt to rid a Town of “Demon Alcohol” by Temperance Leagues. Many were rebuilt, many were not. Most Saloon disappeared by the early 20th Century, replaced by smaller  (and often well hidden Bars). Still, for all their trouble, The American Western Saloon of the 19th Century, will always occupy a place in American History. 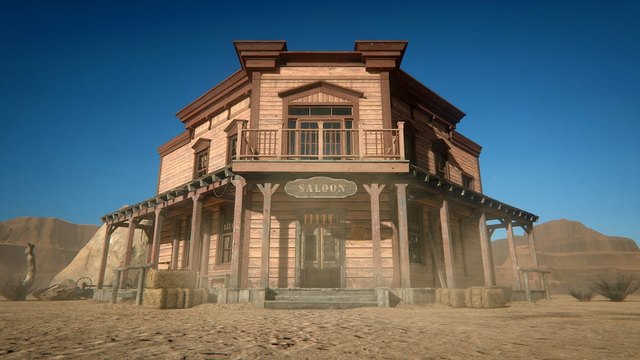