A very common piece of Cavalry equipment in the 18th and 19th Centuries, The Sabretache actually derived from Hungarian usage. Early examples have been recorded in use as far back as the 10th Century AD with The Magyar Peoples. These sachels (or sacks) were often plain and unadorned. Plates of metal were put inside as a form of protection and for creating a reinforced holder. Flints, Powder or other weather sensitive items were placed inside and attached to a Mounted Warriors saddle.

By the early 19th Century, The Sabretache became popular again with Mounted Forces, in particular The Hussars of France. The Sachel was used to carry important documents and orders between Commanders. Often, these Cases were very elaborately constructed and decorated. So much so that most here used to identify particular Units on a battlefield.

There were both “Dress” and “Standard” Sabretaches. The Standard versions were often plain leather. In other examples, Hussars and related Cavalrymen also “wore” their Sabretaches as part of their uniforms, often attaching them to their Sword Hangers. Although largely abandoned by the 20th Century, some French Units still use The Sabretache as part of their Formal Dress Uniforms, in particular those of Hussar origins. 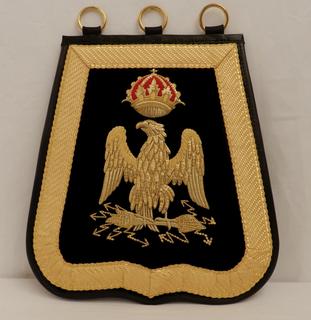