Perhaps one of the few Native American Chiefs who felt that ''Peace'' with The ''Whites'' (US Government), was preferable to War, Thathoka Inyanke or ''Running Antelope'' was Leader of The Hunkpapha Clan of The Sioux Nation in the 1850s. An Associate of Sitting Bull, when young He was a ''fierce Warrior'' and well respected. However, after seeing the full force of The US Army and the technological ''abilities'' of The American Peoples, He was an outspoken Opponent of War with them. He sat on The ''Great Council'' of Sioux, Cheyenne and Arapahoe Tribes, united by both Crazy Horse and Sitting Bull (created to finally counter The US Government's move against their ''sacred'' Black Hill in South Dakota Territory). Despite His views of ''living in peace'' with ''White Men'', He was often looked upon as prime ''Diplomat'' in several key Treaties in the late 1860s. Running antelope could speak and write English exceptionally, and as such was a major fixture to The US Government. His Sect of The Hunkpapha ''refused'' to engage with the rest of The Tribes during The Great Northern Plains War of the 1870s. Late in that conflict, Running Antelope was ''enlisted'' as a Chief Scout with The US Army. Later in life, he was Leader of what would be the last Great Buffalo Hunt on The Northern Plains in 1882, when the last surviving free ranging herd of some 50,000 of the animals were hunted by Plains Indians. Running Bear's best remembrance to History, is being the only Native American to be ''featured'' on US Government Currency in the 1890s. American paper currency had not yet been ''standardized'', and His contributions in The War would be honored (briefly) with His image being placed on the US Five Dollar Bill. Running Bear died in 1896 at 75 years. 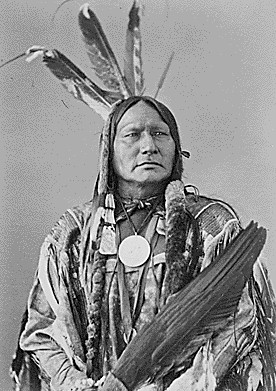