Another famed (and ill-fated) Ocean Liner of the 20th Century, the sinking of The RMS “Lusitania” would serve to press The United States into World War I. A Cunard Shipping Line Vessel, “Lusitania” was once considered the second largest Vessel ever built. The first of Cunard’s “Grand Trio”, which included “Mauretania” and “Aquitania”, “Lusitania” was part of The Immigrant and Wealth Trade that plied The Atlantic between Europe and America.

Built in 1904 and commencing operations in 1907, “Lusitania” was the spur which caused Cunard’s rival The White Star Line to begin work on it’s own “Super Liner” Class of Ships (which included “Titanic”). Finely appointed, “Lusitania” was constructed in Scotland.

She was 787-feet long and 60-feet in height. Her Bean measured 88-feet. “Lusitania” sat 33-feet in the water with a gross tonnage of 44,000-tons. A “four stacker”, “Lusitania” was powered by 25 Coal Burning Boilers that fed 4 Parson Steam Engines, and could generate 76,000 HP. 4 Triple Bladed Propellers were used to achieve her 28-mph. She featured 9-Decks of well appointed amenities for her 2, 198 Passengers. “Lusitania” was crewed by over 800.

“Lusitania” had made “The Crossing” many times (over 200) before the initial outbreak of World War I in Europe. She as with other Liners of her day, were considered non-military targets for the new and deadly form of Naval warfare which used the equally deadly Submarine. It was assumed by all Warring Nations that the transportation of munitions and Troops on board an Ocean Liner was a forbidden tactic. The Imperial German Navy claimed that by 1914, British and her Allies were doing just that. A series of warnings were given that if such activity were not to stop, German vessels would begin to target Liners they suspected as violating these Rules of War.

Regardless of who was correct (Great Britain, under which “Lusitania” was a registered Mail Ship and claimed that “Her” Liners were not used for these purposes), England began to install Gun Mounts (empty) on several of it’s Contracted Vessels. The Regulations which created “Q-Ships” (ordinary Merchant Ships withy concealed weapons), were no doubt the real cause for Germany’s angst.

Enroute to America from England (by way of Ireland), “Lusitania” had left Ireland on May 7, 1915. Off it’s Coast in the afternoon, an explosion suddenly erupted from her Bow. Within seconds, another “unknown” explosion ripped through her Bow Water tight compartments. In 18-minutes, “Lusitania” went down with 1,198 Passengers and Crew. Of her losses, 128 were Americans. American “Warhawks” used her sinking to force US President Woodrow Wilson to declare War on Germany.

Much speculation was made of if “Lusitania” had been carrying munitions clandestinely. Imperial Germany cited this as fact. In reality, the second mysterious explosion was credited with Coal Dust ignited by the real cause of the sinking…..a German Torpedo. Rediscovered in 1982, Divers did “discover” ammunition among her wreckage. Regardless, the loss of life (mostly Women and Children), placed “Lusitania” on the list of some of the worst Maritime disasters in The World. 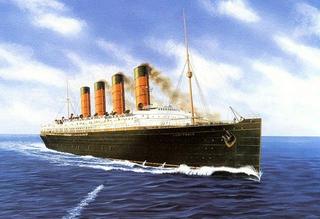