Designed by Civil Engineers, a Revetment is an earthen reinforced structure made to absorb water flow. These are used on Hills, Foothills and in some cases - mountains. The process helps in stopping Mudslides  (ground destabilization). Much older however, Revetments can be seen in use during The Middle Ages as a type of Artillery  (early Gunpowder) "protection" for soldiers. They too were earthen and reinforced. They were emplaced outside of Castles and Fortifications. With the start of Military Aviation, Revetment became important as a means of protecting stationary or parked Aircraft. First widely used by The British Royal Air Force in World War I, Revetments became a crucial part in Military protective architecture.

Construction was either earthen walls, reinforced by at first - wooden logs  (and later, steel plates). Walls ranged from 15 to 25-feet high and could be 12 to 15-feet thick. The walks were slightly angled "inward", and were constructed to enclosed a Plane on 3-sides  (with a fI'll forward opening). Multiple Revetments connected resembled the Alphabet Letter "E". In theory, should a fire or direct Enemy stroke hit a fully fueled or armed Plane, any resulting explosion was channeled up and outward. This would provide protection to other Aircraft parked next to it (stopping a chain reaction effect).

With time, Revetments were constructed of both reinforced concrete (Rebar), as well as steel. Much taller and thicker in Modern uses, Revetments are used as defensive measures for the protection of Air Forces which deploy Forward Fighters and Bombers in Foreign Nations. 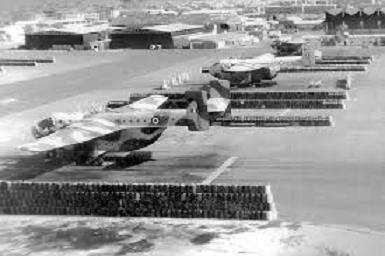