The idea of Armor as a protective device in combat was NOT a new idea in 1915. In fact, (as we know) – Armor is thousands of years old. One would think that (by the first so-called “Modern War”), Armor would have been greatly impractical and unsafe (made more so by advances in firearms and ammunition). But this was not the case. In fact, MANY forms of Personal Protective Armor were attempted (and used) by all sides in the War. Dubbed “Trench Armor”, these experiments were developed to provide protection to soldiers fighting within the “nightmare” of what was called “Trench Warfare”. Small, confined spaces – (often several hundred yards away from an enemy), caused a need to create personal forms of body protection.

The most common type developed was Plate Armor. Developed by Germany (for use by Infantry and Artillery Troops), it was a Component System. Designed to be worn on the outside of clothing, The German System featured 3 to 4 steel (or iron) plates. Jointed by rivets, the upper section was nothing more than the “rebirth” of the Medieval Breastplate. On the lower end of the plate, 3 successive plates (descending in size as they progressed down) – was added. They provided protection to the lower abdomen and groin. Although somewhat cumbersome, The German System was flexible and effective. Featuring .5 to ¾ inch plating, it could stop most small caliber bullets (and was very effective against light shrapnel). Many “captured” examples were pressed into use by Allied soldiers. Another “early example of Protective Armor was the somewhat curious Brewster Armor. Developed in England around 1915-16, the design echoed Australian Robber and Outlaw Ned Kelley's “Boiler Suit” (used with great success against Police).

The Brewster System featured a large “Can Shaped” Helmet that had forward facing eye holes (slits), for front view only. Movable protective “eye covers” could be lowered as well (with some models with “clear” lens, other without). The remainder of The Brewster was a large metal (or iron) shaped plate that was worn strapped to the body. It provided no protection to the arms, legs or back. Some Models may have actually been tested in combat (but they were abandoned for obvious reasons). Other examples (created bu both Axis and Allied Forces), were based upon Front “Apron-Like” plates. Made of steel or iron), they weer close to 1-inch thick. Heavy, they were designed to be more wide that long (to protect more of the torso). They unfortunately limited mobility on the battlefield. Many were abandoned (particularly Austrian versions). British and American versions were similar to “shaped plates” (that could be worn under or over one's clothes”). These designs were plates (fitted into cloth or linen compartment – very much like the Medieval Gambeson garment). These designs would eventually develop into the more “well known” types of Body Armor used today by Police and Military Forces. 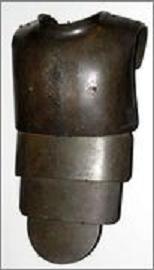