Developed by The Royal Navy of England, the idea to use “unseaworthy” or damaged (but still floating) Ships as “floating Prisons” - was seen in use by them in the 18th and 19th Centuries. Normally, these ships were permanently anchored in overseas Colony Harbors. Masts removed and Gundecks cleared of any weapons – Prison Ships would often have their Firing Ports doors sealed shut. This restricted the circulation of fresh air. Couple by lack of adequate sewage and potable water, Prison Ships were in a word - “Floating Hell”.

Widely used in The American Revolutionary War (primarily in New York and Boston Harbors), often 10 or more of these Prisons were anchored. Guards were ferried to their posts daily (with just several actually living on The Main Deck). Treatment of American Prisoners of War was quite brutal, with little food or water (save adequate medical attention). The British did however, allow “Mercy Leagues” of local Ladies to bring bread and water (and provide limited medical care). MANY Prisoners died on board (often as many as 50 to 100 per week). It is estimated that some 11,500 American soldiers died due to overcrowding and disease.

Prison Ships were again used by The Royal Navy in The Napoleonic Wars. In that War, it was estimated that 5 to 8 percent of all French Prisoners died in captivity. The Royal Navy had one simple “escape clause”. Join their Navy or continue to suffer. It was documented that not one American accepted the offer. Australia “borrowed” from England's idea as well. They deployed Floating Prisons for “Juvenile” offenders around 1813. Great Britain stopped employing “Floating Prisons” by the mid 19th Century. Unfortunately, the “gauntlet” was picked up by Nazi Germany in World War II. They too deployed “Floating Prisons” (ran by The SS), for a period. 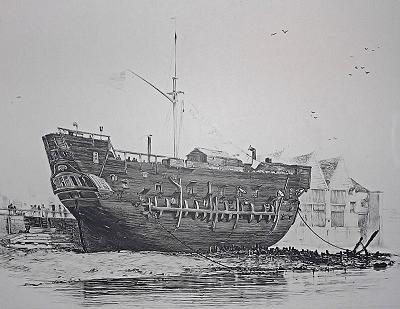