Another Cavalry "Arm" of Medieval Poland's Military, was The Poczet. These Mounted Warriors could be used as either "2nd or 3rd Rank" Troops. They could augment both the heavier Hussars or Towarzysz Horsemen. They were especially useful as Flank Protectors of both. They too, were derived from Lesser Lords. Seen at their height from the 15th to early 18th Century, The Poczet were considered "Medium-Heavy" Cavalry. They wore both Chain Mail Suits and Plated Armor components. Like most Polish Mounted Units, they used much smaller Lances than The Hussars and likewise used a type of Rondache Shields. The Poczet used a type of Shamshir Saber (derived from their encounters with The Turks). Prior to the wide use of early Firearms, they carried and were proficient with the Recursive Bow. They, like other Polish Cavalry Units - would be absorbed into the "blanket" Title of "Hussars" towards the 18th Century. 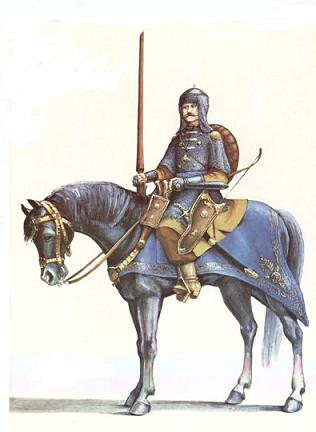