A ''Pit Brow' Woman was a Class of Female Worker common in Victorian England. Since first recorded as an Occupation in 1641, such Women were normally older Women who could no longer work in Coal Mines, but still needed an income. They worked on the surface of a Mine, near it's entrance. As Coal was mined, it was dumped topside into large metal screens. These were called Pits or locally as Brows. The Women sorted and sifted thru the Coal and removed rocks and other debris, often for pennies a day. In 1842, Women for forbidden to work in The Mines, and most were regulated to Pit Brow status. Although Children were still allowed to work in Mines, the very young could still help their Mothers in The Pits.

The Pit Brown Woman also was allowed to wear Trousers. This was seen as a Cultural taboo in Victorian England (and elsewhere). Often these were leather trousers with aprons. They wore heavy gloves and often covered their faces with rags and cloths to limit the inhaling of Coal Dust. The occupation was still in effect well into the early 20th Century. 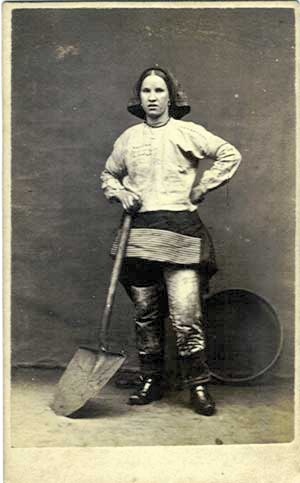